Oh Universe - what in the boojesus kind of game are you playing ?

Today is Friday the 13th of February ( ooh, Friday the 13th...spooky ), the day before Valentines Day, and i had a single red rose delivered to me at work. Guess who it was from ? Average Joe. What ?!? I went one one date with him, 3 months ago, and he send me a rose for Valentines Day. I also had an email from him earlier in the week, saying he would love nothing more than to take me out again. 3 months after our first date.
And did i mention he sent me a rose ? 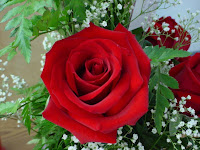 Don't get me wrong - i thought it was sweet, and very flattering, and i sent him a message telling me so. But what am i supposed to do now ? I'm 90% sure i still dont want to go on a second date with him, but now that he's forked out for a rose, on the most expensive flower-sending day of the year, i feel kind of obliged to see him again. But so much has time has passed, and various unanswered emails have been exchanged between both of us ( meaning i have sent a few he didnt answer aswell ).... a date now would be majorly weird, wouldnt it ? There'd be crazy awkward pauses in conversation, and eventually he'd want an expanded explanation of what i really thought of our first date. I dont want to put myself through that do I ? But then again, the poor guy was apparently kind-of, sort-of crushing on me big-time. Maybe i owe him another chance ? Maybe he's seeing something i just cant.

But here is the second part of my dilemma: i have recently started communicating with another guy, still kind of tentatively, but he seems really sweet. Should i now put off meeting up with this guy for a casual coffee or something, just so i can give Average Joe a second chance ? And why is it this all becoming weirdly complicated on the eve of Valentines Day, when i was perfecly resigned to staying in by myself and watching a Clive Owen film ( mmm...Clive Owen... )?

So i guess it all comes down to a handful of questions :
1. What is the Universe playing at ?
2. What should i do about Average Joe ?
3. Is Average Joe a stalker ?

Help me people, this is so not within the realm of my experience!
Posted by Amy xxoo at 2:11 AM