See, i kind of, sort of, might have thought i was in love with someone ( In retrospect, now that i have Mick and we have Flynn, i know that it wasn’t ... ). I let myself feel all those happy feelings i hadn’t had, convinced myself that maybe i had found something great, finally. When i told the object of my affection how i felt, he told me he didn’t feel the same way. He thought i was a great girl, and a great friend, but nothing more.


It sent me into a tailspin – and started my second major bout with depression. Within only a few months i was back to the self loathing, the wondering why i wasn’t good enough and thinking i never would be.. Recognising what it was this time i went back to a GP, did the whole mental health questionnaire again, and got a referral to a local psychologist.

Opening up was easier this time – i’d been there, done that. It wasn’t so scary, or so taboo. What was scary was the prospect of what he was asking me to do... to get out in the world, alone. As much as i was used to being alone, being alone at home and hitting the pub on my own were two totally different things. We both agreed that my major problem this time was not so much self confidence, but loneliness – and the only way to alleviate loneliness was to find new friends. Easier said than done, right? 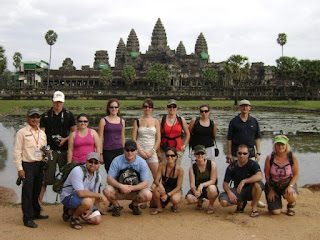 Making friends in Cambodia ( i'm 3rd from right, bottom row )
I decided that there was nothing to be done but give it a shot. With the help of anti-depressants ( again ) i started small – i spoke to people at the gym instead of just a nod and a smile; i went out to the movies or to lunch with my sister, just to get out of the house; i went on a trip to SE Asia and made friends amongst strangers; and strangest, and maybe bravest of all, i started internet dating.

My friends and family thought it was a bit weird, or maybe a crazy/desperate move, but little by little i got my confidence back. I had a few good dates, a few ok dates, and one particular date with the most condescending, materialistic, arrogant man i may have ever met ( blergh! ) I went on an ok date with an ok guy that i just didn’t click with, and then found out he thought i was the bees knees when he sent a friend to my place of work to talk to me a few months later ( kind of creepy.. ).

And then – i met Mick. Online. On a dating website. Our first date, a casual lunch at the pub, went for 5 hrs. We saw each other next day, and a few days after that. And the rest is history! Or, for the short version: dating, pregnant, engaged, baby, family, and getting married in 17 days! I’m blissfully happy, and despite a brief blip when Flynn was 6-8 months old ( which could have seen the onset of another episode but, thanks to intervention, didn’t ) i’ve been “well “ for over 3 years now.

And i hope to stay “ well “ for a long time to come. But i know that that isn’t a given – i have to consciously be aware of my negative emotions when i feel them, and work to keep them in check. And i feel that part of that work is also to tell my story – maybe not to just blurt it out to everyone i meet, but be open and honest when the occasion calls for it. Mental Health Month is one of those occasions. And on this occasion i’m asking you to share to – whether you can share a story, or show support for those who need it...
Posted by Amy xxoo at 1:46 AM