And what, you ask, was " Operation N.M.D "? Well seeing as Mick and I have a big boy on our hands now, we decided a week ago that we would kick start " Operation No More Dummy ".... and its been pretty much a 100% success! 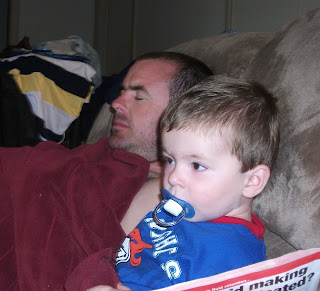 The boy with his beloved binky ( and Daddy )...
We explained to Flynn that because he was getting to be a big boy now that it was time to get rid of his dummies, or binkies as he calls them. (We pretty much already had him down to only having his binky at sleep times, or when he was particularly upset.) He wasnt too keen on the idea at first but when we explained that it was the Dummy Fairy that would come and take them - not us - he seemed a bit more interested. Mick said he'd seen the Dummy Fairy down the street and that she'd told him that Flynn was big now, so she'd come and get his binkies soon. I said i'd talked to her on the phone and that seeing as she wasnt busy that day, she would come that night.
So - thats what happened. Last Friday night we had a visit from the Dummy Fairy. She took away all of his dummies ( not even one left for an emergency! ) and in there place she left a letter and a little present. Excuse me not having take a photo but the letter went something like this:
Dear Flynn,
I have come to take your binkies because you are a big boy now and you dont need them anymore.
I have brought you something else special that you can take to bed instead.
Love The Dummy Fairy

And there next to his bed, in place of his dummies, was a small plush Elmo, something friendly and familiar that he could cuddle in bed.


He was quite happy with that - the boy loves Elmo! - and his nap that day with no binky, and no trouble. Same thing that night - he went happily off to his sleep with no problems but we did hit a slight snag when he woke in the middle of the night. I went in and gave him a cuddle and explained that no, he couldnt have his dummy - the DUmmy Fairy took them remember? He calmed but he kept calling out, upset. So eventually after 45 mins of leaving him to try to fall asleep Daddy went and jumped in bed with him and everyone got back to sleep. 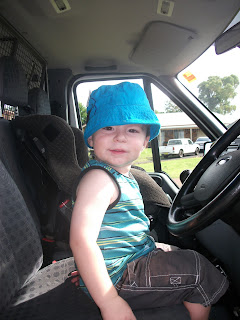 .... and my big boy, dummy free, "driving" Daddys work van
And thats been it - the rest of the week has been easy. He's asked for his binky a few times but everytime he's asked i've said " You cant have one. Do you remember why ? " and says " 'Cause the Dummy Fairy took them away ".... and thats it. He hasnt where they've gone or when they're coming back - its just she took them, she gave him a present and thats it.
Now if only toilet training were this bloody easy!