I know i wont be the only one to post about this today but - its been 10 years since the September 11th terrorist attacks on the World Trade Center in NYC. Unfathomable at the time, and i think even in the jaded world we live in post 9/11 there is still something of the " How could they possibly have done that ? " about it all. So, in memory of all those who lost their lives that day, i'm going to re-post an entry i made back on September 11th 2008 ( 3 years ago and on the 7 anniversary of the attacks ): 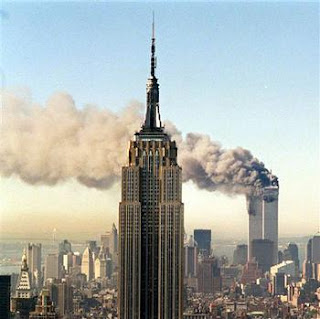 The question was asked in my local paper today - " Do you remember ? " Frankly, i thought it was a stupid question. How could anyone possibly forget ? Of course, I'm talking about the atacks on the World Trade Centre 7 years ago today. What kind of person could ever forget the articles and the images accompanying them, even if they wanted to ?


I was in Year 12, my final year of high school, in 2001. The attacks had occured overnight, Australian time, and I remember my mother waking me earlier than usual telling me that two planes had crashed into the Twin Towers. Still groggy with sleep i wasnt exactly sure what she was raving on about - until she made me turn on the tv. I sat in bed, still in my pyjamas with the sheets bunched around my knees, horribly transfixed. I didnt want to see planes punching holes in steel, or desperate people leaping from buildings, or faces covered in ash, a trail of tears tracing its way down their cheeks. I didnt want to see that, but i couldnt look away. I didnt want to see that , and i dont want to remember, but i do.

I went to school early and gathered around a radio with about 30 other seniors. Any 12 or 13 year old Year 7 kid that even let out so much as a peep got threatened with the evil eye and a " Shut the fuck up, you idiot! ". I think it was obvious that we all knew we were witnessing an important moment in history. We Year 12 students were allowed to have the radio news playing in every class that day, probably as much for the teachers benefit as it was for ours. I dont remember which algebraic equations i worked on that afternoon, but i do remember wincing as a light plane flew over my maths class room.

My brother worked at the local McDonalds after school, and i went with my mother to pick him up at the end of his shift. It was unusually quiet, not many families calling in to pick a Big Mac or a Happy meal; i sat at a table staring up at the tv and cried. Bawled, in fact. A totally public place, good old McDonalds Family resturant, and i had nowhere to hide, but i sobbed my heart out at what i was watching. The news reports just kept repeating the same images of people jumping to their deaths. I couldnt help but wonder what last lonely thought they may have been thinking to push them to that extreme. Nor could i help but despair at such a waste of life - and for what ? None of us really knew at that point.

I didnt know anyone in New York City. I didnt even know anyone who lived in the US, but my heart bleed for the families who lives had been irrepairably damaged by such insanity. I wondered what they must be thinking, feeling, hoping, praying; I wanted to let them know that they werent alone in their loss and their sorrow. And i did, by writing a letter to the New York Times. I doubt that it was ever published, by message of support was there on the internet, recorded for all of humanity to see. If i could have helped dig through that rubble, to comfort a crying child who had lost a parent, to donate blood or skin to burns victims, I would have. I may not have been there, I may not have lost any of my people, but i felt it all the same.

It wasnt until i lived in the US during 2005 that i got some insight into what it was really like. I lived in NJ and my host father worked in New York City. On a trip to the local zoo one cloudless, blue sky September day with my boys and their grandparents, I noticed Grandpa Jerry sitting on a fence alone, just staring up at the sky. I asked him what was going on and he told me he was just reflecting - this was as perfect a day as that one looked like it was going to be. If the youngest of the boys had not been born the day before - September 10, 2001 ( happy birthday H! ) in a hospital in Jersey - my host father would have been there, one block from the WTC, when the planes hit. My host father had lost people he knew but luckily had been given a healthy, beautiful baby boy to take his mind off all that. 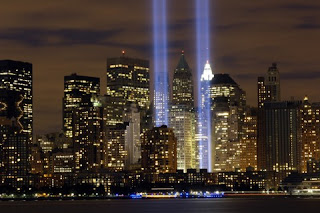 I dont mean to dwell on these things of course; but isnt that what remembering is ? Isnt remembering dwelling on the past, whether it be good or bad, and whether we want to or not ? Sure, I could have gone through today pretending like i didnt know the date, had forgotten its significance, or focused on sending good birthday vibes to my little H ( who is now big... ). But kind of memorial would that be ? What kind of respect would that be showing those who lost their lives ?
Honestly, I dont particularly want to remember, but some things you just cant forget....
Posted by Amy xxoo at 3:23 PM