I'm Building An Ark - But I'm Not Growing A Beard

I was listening to one of our local radio stations this morning and, in anticipation of the heavy rain that has been forecast for the next few days ( which, mind you, i bet doesnt eventuate.... ), the morning dj team were discussing whether they had better build themselves an ark. All that had to make it with was some newspapers, some Blutack and a pen but hey.... it got me thinking. If that Biblical flood was a-coming, what would i put on my ark?
( Please note that, like all good hypothetical things, such as deserted islands, my ark will be fully electric. Its a pimped out ark, okay? ) 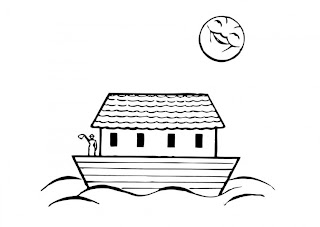 My family -  this one's a given. Mick, Flynn and the rest of my immediate family. Extended family i could give or take but we gotta take Poppy and Grandma and the rest of them. Also , we're going to assume that my friends have their own arks so they dont need to hitch a ride with me.
My computer -  and internet connection. We have to stay connected to the rest of the world ( well, all those people who were savvy enough to prepare for the watery Apocalypse ... ) and how else are we going to know when its safe to come out and dock?
Books - lots of them. Something for everyone to read - everyone except my dad and my brother, who are not such big fans of books. Maybe i should take some magazines aswell, just so they have something to entertain themselves with. Booby magazines are banned though!
Food - uh. Duh.I'd be getting my bake on before we set off into the great unknown - heaps of freezable pastas and casseroles and yummy, yummy cakes and slices. We wouldnt want to run out of food and have it turn into a whole plane-crash-in-the-Andes cannibal type situation, would we ? Because if it came down to that i think i'd be one of the first to go - my bootiliciousness would be delicious!
Blankets and pillows - and possibly beanbags and mattresses. We wana be comfy in our ark because Gawd knows how long we're gonna be in there.
And finally....
Deoderant - lots and lots of it. And maybe dry shampoo. I suppose we could rig up some kind of shower in this electrical ark of mine, and there would be plenty of water to go round, but failing that we gonna need some kind of BO buster.... it'd be stinky up in that house ark!
Posted by Amy xxoo at 8:20 PM