Time again for another Blog This! challenge. This weeks challenge is:
If you can think of a situation where you'd love to be a fly on the wall?

- your funeral?
- your boss' office?
- your favourite designer's drawing board?
- set of your favourite movie?
- your heart-throb's bedroom?
- perhaps it's the prime-ministers office????
What would you like to see/hear/happen?

After much thought ( and not wanting to use one of the examples ) i've decided that i would want to be a fly on the wall in Adriano Zumbo's kitchen. 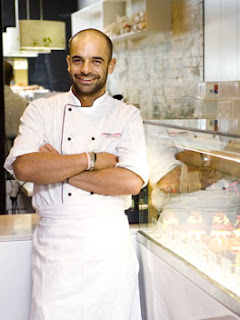 There are only two possible reasons that you wouldnt know who Adriano Zumbo is: a) you are one of those weird people who dont watch " Masterchef " or b) you are one of those weird people who aren't Australian ( joking, joking... ) and therefore can't watch " Masterchef ". In any case, Adriano there is a master patissiere and has been featured on the show a handful of times, presenting his dishes as a challenge to the contestants. He's done the croquembouche and 7 layer chocolate cake from last season, and this season he caught Peter out with his macaron tower and tripped Alvin up with the V8 cake. All of which, of course, i wish i could both make and eat. 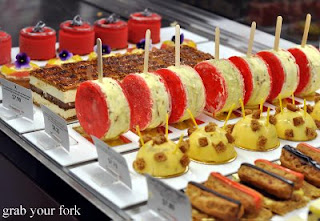 A selection of Adriano's yummiest...
So - i wish i could be a fly on the wall of Adriano's kitchen so i could be witness to his creative genius. I would love to know how he comes up with all this incredible ideas and then see how he perfects them. How many times does he attempt a 7 layer chocolate cake before he finds the perfect combination? How does he decide that its 7 layers and not 6 ? What gave him the idea to try beetroot flavoured macarons, and then combine them with a raspberry flavour - and put them on a bloody styrofoam tower? I'd love to be there ( hidden away of course - i suppose flies arent really encouraged in a commercial kitchen... ) as he had a new idea, tested his flavours, come up with a recipe and officially created something new. And, seeing that i'm a fly and they taste with their feet, i could fly down and sample everything! Although it'd have to be a small taste of each - i'm thinking with a fly-sized body i could give myself a huge sugar hangover with all that yummy, sweet, Adriano Zumbo goodness......
Posted by Amy xxoo at 3:54 PM