Insomniatic Musings Child Of The Month 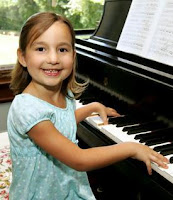 Now - let me just point out that i've been so lax with running features that i cant even remember which friday of each month i said i would do Child of the Month. So, forgive if i'm a little out of wack here ......

NAME: Emily Bear
AGE: 8 years old and counting
CUTENESS FACTOR: Off the scale!
REASON FOR FEATURING: I’m featuring Emily Bear for two reasons: firstly because she’s talented, and secondly ? Because she’s just so cute! Seriously – have you seen her on the “ The Ellen Degeneres Show “ ? She’s just pure cuteness on a stick! Altogether now….awwww. For those who haven’t seen her on TV, Emily is a young piano prodigy who also happens to be adorable. I’ve seen her twice on “ The Ellen Degeneres Show “ and although I’m no music virtuoso myself, I have to admit she’s pretty impressive for her tender age. I mean, she composed a song for Ellen and Portia for their wedding, which made Ellen cry. How sweet is that?
Amongst her other achievements: she played at the White House when she was 6 years old; she's the youngest musician ever to have featured at the Ravinia Festival in Chicago ( ok, this one doesnt mean anything to me but apparently its noteworthy ) and she's released 4 albums so far. 4 albums at 8 years of age..... holy guacamole.
I suppose the cynics amongst you might argue that she’s probably being pushed by bossy stage parents, or that any pieces that have been written by Emily must have been, at least in part, written by an adult. Shame on you! Sure, maybe her parents did push her to start piano lessons at a very, very young age ( NOTE: I’m not saying they did. If your Emily Baer’s parents, please don’t sue me ) – but most children that age wont keep something up unless they really enjoy it. They also wont be good at something unless they have a natural ability and a passion for it. So, as far as I’m concerned Emily Bear is a cute, talented little moppet whether its her choosing or not.
So congratulations to Emily Bear on being Insomniatic Musings Child of the Month – see what kind of acclaim talent and a cute set of dimples will get you ?
Posted by Amy xxoo at 7:30 PM