Do you think they're trying to tell me somethng ?

Sometimes I would really like to know what is up with weird dreams. Specifically, weird dreams involving celebrities. Even more specifically, weird dreams involving having sex with celebrities. I read somewhere when you dream of having sex with someone that it doesnt necessarily mean you want to sleep with that person ( unless, of course, you really do want to shag Johnny Depp... ) - rather there is something about that person, a personality trait, that you admire or are attracted to. I could understand that if you dream of sleeping with say, your boss or an employee mentor that you might want to emulate, or that really good friend of a friend that you'd really like to be as popular as. But what if the person, or type of person your sleeping with in these dreams, is somewhat unsettling ? See, last night i had a quite vivid dream involving myself and the recently deceased ( he died on my birthday, god rest his soul... ), Heath Ledger. But not grungy, hippie dad Heath. Not long haired, karaoke singing, high school rebel Heath. Not even clean cut but secretly gay cowboy Heath. Nope, this is the Heath i was dreaming about: 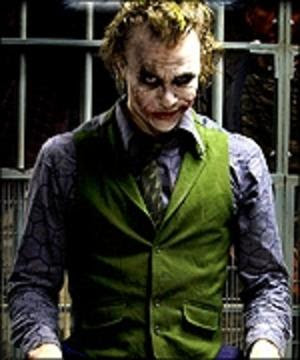 Psychotic, anarchic, murderous clown Heath. Well kind of anyway - he wasnt dressed so much as the Joker but the Heath in my dream had the same kind of personality, only a little less trigger happy. He was angry and vengeful and warning that he was going to kill someone. I didnt see that - all I got from him was that he was lost, confused and scared, and so I went to him. And... yada, yada, yada, make up the nasty details for yourself. But the point is I was intensely sexually attracted to a slightly demented, and potentially dangerous, character played by an actor who is dead in real life.

This is not the first time I've noticed this odd dream attraction. Truth be told, and i've never really admitted it before, but I have had many the fantasy involving this man: 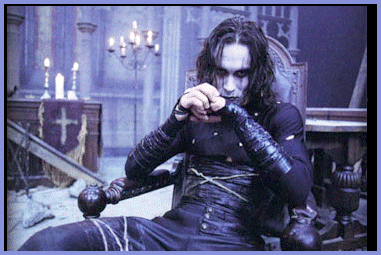 That is Brandon Lee, as he appears as Eric Draven in " The Crow ". I dont know how many of you have seen the film ( which i count as my all time favourite ) but basically Eric Draven is a guy who was murdered by neighbourhood thugs and returns from the grave to avenge his fiances violent death. Oh, also - Brandon Lee is dead. Do we see a pattern here ?

I'm questioning the meaning behind these dreams. Why, in fantasy land, am I so intensely drawn to the dangerous, violent, slightly Gothic, overly made up, broken boys ? Why do my " dream " men like painting their faces and seem to have all kinds of emotional issues ? Could it be that i am subconsciously transferring some of my own characteristics to a symbol of relationships? Or does it mean that in reality i'm looking for a beautiful but broken boy that i can fix and, in doing so, fix myself ?

I really dont know. Perhaps i'm over thinking this and i just really want to get it on with a boy in makeup and leather pants. I wish someone could give me the answer. Seriously, if you have any insight into this let me know. Otherwise i might have to ask my psychologist and it's gonna be kind of awkward bringing up the fact that my most intimate sexual fantasies involve face paint, violence, and talented actors dead before their time.....