So, after having tried on and off since his 2nd birthday back in December, i think my son may finally have got the hang of this whole " potty training " thing. 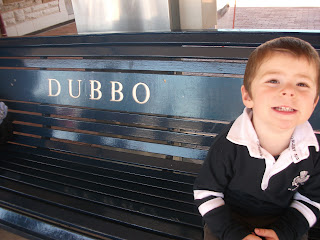 Waiting for a steam train ride with Daddy and Pop, back on Fathers Day

I'm not gonna lie - he had me soooooooooo damn frusturated. He was able to tell us when he had set or dirtied his nappy, and was always wanting to come to the bathroom with us so he could " watch " - both signs of being ready to toilet train - but he would scream bloody murder if we even tried putting him near the potty. I started out last summer putting him in undies and taking him to the potty every hour or so, but he'd just cry and scream and then wee on the floor. We gave it a month or two, let him continue in his nappies and tried again.... same thing. Cry, scream, wee in his pants. Winter set in and that was the end of potty training, i wasnt even going to bother trying in the cold weather.

Then, along came Miss Tully and with her the idea that i now had 2 kidlets in nappies. Umm.... no. No, i just wasnt going to go along with that. So, a few weeks ago, i took Flynn aside and explained to him that Tully was the baby of the house wearing nappies, and he was the big boy.... and as we all know, big boys wear underpants. Could he try wearing his underpants for me that day? He said yes he could and, the rest my friends, is toilet training heaven. He's been in undies all day, everyday, for the past 3 weeks with only half a dozen accidents. At first we took him and got him to " try " and when he did a successful wee in the potty I gave him a sticker for his chart. Within 3 days he was going into the bathroom and going on his own, telling me when he was finished, and asking for his sticker! We also let him put his pull up nappies on at 5pm as i knew he wasnt too keen on using the potty for his #2's yet. However, that has also changed in the past week - we've had successfully #2's on the potty everyday for 6 days... which means Flynn is now only wearing a pull up exclusively for night time sleep.

I couldnt be prouder - or more amazed at how he just, one day, " got it ". Everyone told me he'd come to it in his own time, that one day it would just click, but i didnt expect to literally be one. single.day. One day he was in nappies, refusing to even look at his potty, the next he was agreeing to underpants and going like a boss! Guess it just means my baby boy is growing up into a little man - sweet big brother, pedalling a tricycle instead of using his feet, on the list for preschool and finally using the potty. I swear its only a tomorrow away and he'll be in kindergarten!
Posted by Amy xxoo at 2:49 AM