Firstly, my apologies to everyone for my depressive rant in the last post. For anyone who doesnt know - and who hasnt figured it out yet - I actually do have depression ( its not just a little joke when i mention it... ) for which i take medication. However, sometimes the black dog rears its ugly head and i have a really bad depressive episode. This past weekend could be counted as said episode, and i barely feel in control during these moments, so ordinairly i would think twice about posting such a rant. So apologies for dumping it all on here, but many thanks to those of you who left kind and supportive comments. I could totally feel your bloggy-love...And now onto something way less intense. You know i love a good list, and you also know i love a good meme - so i'm creating both in one! Someone asked me yesterday what the last movie i saw was, which got me thinking about " lasts ". Last movie, last book, last purchase - all that good stuff. So i thought maybe i should make a record of some cool " lasts " thus sharing some more of myself with the rest of you. Brilliant idea you say? Yes, i know, its what i do. So:

Last day of high school :
I dont remember the exact date but it was some time during September of 2001. What i do remember is that i could not wait to get the hell out of there. We had a graduation ceremony - no hats, no robes, just full school uniform and the presentation of graduation certificates, and speeches by our school captains, school principal and year advisor. Kind of a snoozefest really. Even though i knew there was going to be a morning tea held afterward for the graduating students and their parents ( if they indeed attended ), as soon as that assembly was over I left. I could not stand to be in that institution one second longer than i technically had to be. Not that i hated school - I loved getting to hang out with my friends, and i didnt even mind the classes so much - i just didnt like the whole concept, the institution of " school " as it were, not by the end of it.

Last good home-cooked meal:
It was poached salmon with a yoghurt dill sauce on a bed of potatoes and cherry tomatoes, cooked by my father last Tuesday night. One word - delicious! And i know you're thinking that sounds pretty damned fancy for a home cooked meal but, frankly, my dad is quite the culinary whiz. He's not a trained chef or anything but he's just one of these people who can take a recipe, pull together the ingredients, and the meal will turn out exactly the way it looks in the cookbook. Almost always tastes pretty good too. I'll say this, my dad is a much better cook than my mum - i love her, bless her cotton socks, but she aint much of a cook unless its something fairly simple.

Last birthday you helped celebrate:
My dad's 47th, on April 25th. Seeing as my dad isnt real big on my making a fuss over himself, his birthdays are usually simple affairs. Put it this way - he says if any of us try and organise a suprise party for his 50th in a few years time he'll walk in, let us all yell " Suprise!!! " and then promptly take himself off to bed. And yes, he would totally do that, I have no doubt. Thats just the way he is ( and part of the reason i love him ). Anyhoo, so we just had the immediate family around for dinner, which my dad cooked ( yes, so very sad i know.... ) . I cant remember what he made for dinner but I was responsible for dessert -apricot cheesecake with macadamia crust. Don't salivate too hard . It might sound fancy but its pretty simple if you're the dessert Queen that i am. Any celebration or special occasion we have, i get called upon to make the sweets because, hey, its just what i do. Fathers Day this year ? My own cherry ripe concotion - chocolate mousse with blackcherries and coconut.

Last good vacation I went on:
Southeast Asia , last November. I spent three weeks tripping through Vietnam, Cambodia and Thailand - completely awesome! If you search your way back through some of my old posts you can probably read a little of my adventures, but suffice to say I had some great fun touring around with 13 other people, all like minded, almost all fantastic ( i say almost all because we were saddled with two late 50-ish Brits who did nothing but complain). I got to experience some awesome culture , see some gorgeous sights, and eat some fantastic food! Seriously, you want some good, healthy, flavoursome food, hit up South East Asia. There is no better place to get Thai mussaman curry than in Thailand. Oh, and lookee here - thats me at Angkor Wat in Cambodia!! 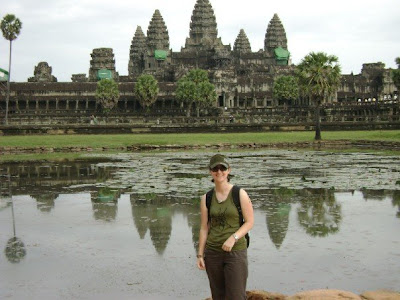 Last " big " purchase:
So, for me, anything over about $200 is a big purchase. So, that being said, my last purchase over above this is my cute little HP Mini notebook. I've had it for a couple of months now and its serving me very well. Its nice and light and little ( just like i'd like to be... ), although the battery power doesnt last quite as long as i'd like. But no matter, its much better than my frightfully old school desktop that i was using ( and by old school, i mean its probably about 5 years old... ).

Last gift I bought:
My sisters birthday present. I was going to tell you what it is, but it has just occurred to me that she could possibly read this entry and find out. I'm about 99% sure she doesnt read my blog - firstly because she's always giving me crap about being on the computer so much, and secondly because she doesnt read, well, anything really - but even still, i hate for her to stumble upon it in the address bar drop down box and ruin the suprise. I will say that because its her 18th birthday its a special present. 18 is the legal drinking age here in Australia, so you're 18th is like a " coming of age " birthday. We're all going out for dinner and then my best friend and I are taking her to a few of the local pubs for the first time. I cannot wait to get her screaming drunk and hang over the next morning.... its going to be so sweet!

Last time I was lost for words:
I only have three words to answer this one - The Mary Incident.

And thats all, ladies and gents. I'm not going to tag anybody to do this meme ( although if I did, I'd tag Andy, Steph, Paula and Sheena :) ), so if you want to steal my idea and make your own" lasts " post then please feel free. I hope this has been much more enjoyable than my last entry - perhaps look forward to a " firsts " post in the future!
Posted by Amy xxoo at 3:22 AM