So, its semi finals weekend here for in Australia in the National Rugby League competition. There are two games being played this weekend to determine who will meet in next weeks Grand Final. I know, thats not quite as fancy a term as Super Bowl ( why is it called a bowl exactly? I dont get it..... ) but its the pinnacle of the season. So, we have two games being played this weekend - one tonight and one tomorrow night - and the winner of these games will play for the championship. How exciting! I was going to do a post detailing how i think each game will go but the first game has already started and i think i can pick how its going to end up already (the Melbourne Storm vs the Cronulla Sharks - its going to be a resounding Storm victory as far as i can see... ). However, i still wish to comment on tomorrow nights upcoming game: 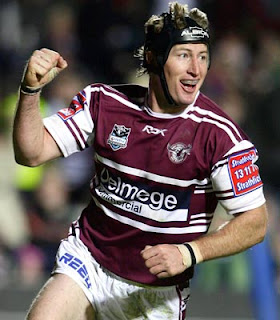 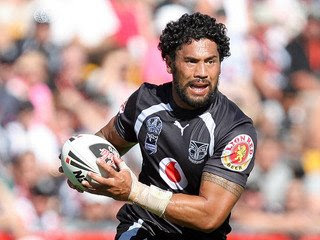 Or, for me its comes down to Steve Menzies ( at top in the maroon ) VS Ruben Wiki ( right there, in the black ). Why ? Because they are both legends, they are both retiring, and this could potentially the last game i ever see either one of them play. It has to end for one of them this weekend which, frankly, is kind of sad. I dont actually barrack ( or, for the Americans in the crowd, i dont root for ) either of their teams, but you cant help have respect for two blokes who have been playing top grade professional football for over 10 years, who have both played for their respective countries, and who give everything of themselves in every game they play. They're the hard men of rugby league, the workhorses; the elder statesman of the team who inspire the younger players.I dont really mind who wins ( although if i had to pick, I'd say it'll be Manly ), i'm just exciting to see these two players go round one more time. I'm gushing, i know, but if your a fan of a sport you get attached to the good guys.

And what about Steve " The Beaver " Menzies ? I dont know what his team mates are doing to honour him but i believe a sign at a recent game says it all from the Manly fans: