What Parenting Technique Works Best For You?

I've come to the realisation this afternoon that Mick and I are on to a winner ( thus far ) when it comes to getting the best behaviour from Flynn - we're big fans of the " 1-2-3 " technique. That is, when Flynn isnt listening or isnt complying when asked to do something, we tell him that we're going to count to 3 and if he's not co-operating we're going to confiscate something he likes. 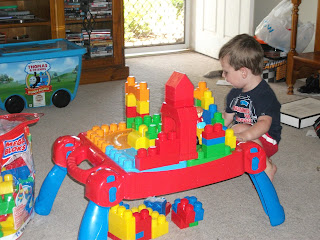 Sometimes, we have to threaten the blocks, or the Thomas the Tank Engine stuff you can see in the background...
We had been using the " Naughty Spot " as our main discipline tool, and though we were very consistent with it i found it started to lose its "success " ( for lack of a better word ) somewhat after a while. We were sending Flynn to a corner of our dining room and making him sit for the count of 10 before he could come back out. It worked at first , but eventually i guess Flynn figured out that 10 seconds really is not that long to sit out ( although i think at 20 mths, when we started using, that any longer would be too much ), and eventually all the " Naughty Spot " was achieving was teaching Flynn to count to 10! ( He skips 6 for some reason, otherwise he can count to 13.... )

So i thought we'd change tact a bit. My fathers biggest parenting rule - well, rule to life really - is that everything has consequences, and at 2 yrs of age i thought Flynn was old enough and smart enough to start grasping that concept. And so far, because we are consistent with it, it seems to be working. For eg:
I might ask Flynn to pick up his pencils off the floor. I'll ask once, and if it isnt done in a few minutes, i'll ask again, reminding him that this is the 2nd chance he's had ( " Didnt Mummy already ask you to pick up your pencils? Could you pick them up now please? " ). If it isnt done the 2nd time, then we get the 3 count ( " Mummys going to count to 3 - if you dont pick them up before i get to 3 i'm going to take your dump truck away " ). The first time we used this technique Flynn didnt pay much attention.... so his favourite truck got taken to my room and put in my cupboard. He watched me take and put away and he didnt like it so much. He cried, he stomped his little feet, and then i explained that if he could use his "listening ears " for the rest of the day he could have it back. He did eventually get his truck back, and that was only one of two times i have had to take things away - every other time he's listened and done what i've asked before i got to 3.

So what about you other mummies - do you have a technique that works for you? Are you consistent? And do you feel like a massive hard-arse Mum when you do have to "punish " your little people?
Posted by Amy xxoo at 1:21 AM