IN case you've managed to avoid all the retail hype and the florists running around like chickens with their heads cut off.... today is St Valentines Day. And, in keeping with the general lovey-doveyness of the day i've decided to share with you all my personal love story. And Micks. Ours, if you will. And though it may not be as epic as some you might read today, its worth sharing i think.


Why? Not only because we're, like, crazy in love and stuff, but because Michael and I are an internet dating success story. I know a few of you very loyal readers know the origin of our relationship but for those who are new around these parts - Mick and I met on an internet dating site. We did the whole write a profile, hope someone likes it, find your match thing that so many others do, only instead of winding up in the basket of web dating horror stories we clicked. Big time. Our first date was lunch at a pub bistro in town.... that lasted 5 hrs. My sister actually texted me 3 times to check where i was an if i was ok. I didnt answer any of those texts because i was having too good of a time to notice them. 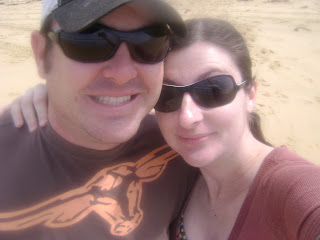 Me and Mick early in our relationship....
We saw each other the next day ( the rule of waiting at least 3 days be damned ) - we went to see " Watchmen " and " Gran Torino " back to back, and then went for an impromptu dinner. He rang me a few days after that and travelled 45 mins into town after a full day of work just so we could have a picnic dinner. He invited me away for the weekend to meet his brother after only 2 weeks of dating - rather than scaring me off, i said yes and had an "interesting " time at his brothers house in the middle of nowhere. I then had to go away for work for 2 weeks, during which time i racked up a mammoth phone bill because we spent every day texting each other. He picked me up from the airport when i came home and that was it - we've been inseperable ever since.

It probably bares mentioning that we fell pregnant only 6 weeks into our relationship - but, contrary to some peoples very nasty opinion, that is not why we stayed together. Mick told me only 3 weeks into our relationship that he would ask me to marry him oneday and i told him to give a few months, think about it a while, and then see how he felt. 9 months into our relationship, and at 7 months pregnant, he did ask, and i ( obviously ) accepted. Having a baby was, of course, a huge part of our relatinship by then, but we didnt just stay together because it was " the right thing to do ". 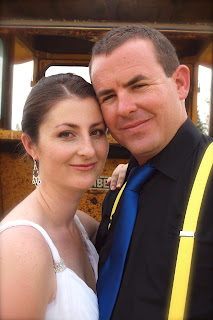 .....and at our wedding in November '11
No we stayed together, and are together still because we love each other. Even when he drives me nuts or he drinks too much and lets the neighbour shave his head at 3am .... i still love him. Even when he gets grumpy at me because i keep stressing about our new business ( because he's chillaxed like that i'm a bit anal ), or he loses his patience with Flynn... i love him. I especially love him when he lets me sleep in ( every Saturday morning! ) or when he offers to get tea so i dont have to cook. I guess, whichever way you look at it, love is the glue that holds us together, and Flynn is the very special suprise bonus of being that in love. And after 3 and bit months of marriage, i can quite happily say that our love continues to grow, and continues to create special little things.

So what about you? Do you have a love story worth sharing?
Posted by Amy xxoo at 12:42 AM