I think I may be the bad cop in our parenting relationship. 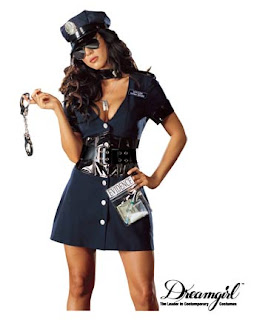 Not this kind of bad cop though - Mick wishes!
See, in the last day, Mick has twice "rescued" Flynn from a place he didnt want to be - in his cot, going to sleep ( a la Project SleepyTime ) and on the floor having his tummy time. Though the self settling is getting better, sometimes Mr Flynn is still trying his darndest to resist going to sleep. I, being Mummy, am happy to let him cry for 10 minutes and then go in and settle him, knowing that the whole thing is beginning to work and he will eventually fall asleep. Last night Mick says " you want me to go in this time? " and. happy that Daddy was wanting to help out with the Project, i obliged. Next thing i know Mick is back - with Flynn in tow. " He didnt want to go to sleep " he says. Well yes, i know that, but he would have if you'd given him just a few more minutes. Flynn, meanwhile, still has his dummy in but his smiling his little head off. In his mind its Flynn-1, Mummy-0.

And then there was tummy time. Flynn is not really a fan. He never has been, but i think now that he's older he's starting to get frusturated that he can lift his knees and belly off the ground but he still cant move forward. I have tried telling the poor little bloke that he wont learn to crawl unless he has his tummy time, even if he doesnt like it. I have even discussed this with Daddy. So i put Flynn on his tummy and within five minutes he's having a whingey cry. I tell him he's ok, you'll be alright and go to the kitchen to get a drink....and come back to find Flynn off his tummy and on Daddys lap. " But he was crying, he didnt want to be on his tummy " says Mick. Grrr.... Flynn-2, Mummy-0.

Then, this morning? For the first time ever Flynn has a cuddle with Daddy and then, when Mick hands him back to me....Flynn turns his little head, reaches his arms out to Daddy and starts his whingey noise. I want my Daddy! Although i'm glad that he's finally past his clinginess, and loved the look of joy on Mick's face when he realised he was the " wanted " one this morning, methinks this also means that Flynn knows Daddy is a softie - and that Mummy is the hard arse.
Posted by Amy xxoo at 3:45 PM