Knives and Forks and (S)poons...

So - my normally voraciously appetited son went through a stage last month where no matter what i tried to give him for his dinner, it was being thrown off his plate ( or the spoon knocked from my hand ) and onto the floor. He went from being a baby who would eat pretty much anything to a squirming, screaming, messmaker who was refusing food he loved only the day before. Out of exasperation i started giving him a sandwich, some cheese and some fruit for his dinners, but i knew that the scrimping on the vegies couldnt last too long. To be quite frank, dinner time was doing my head in. Mick and I, being first time parents, had no idea what the bloody hell was happening but we sure as hell knew we needed to put a stop to it ASAP. So, as a first time parent, how do you figure this type of conundrum out? You ask your other, older, wiser mummies. And, thanks to my wonderful work colleague, "Aunty " J, we found a solution....we eat at the table, at the same time. 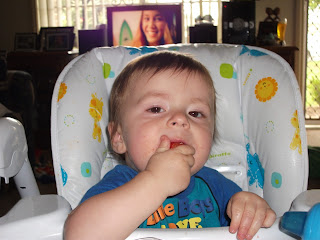 Mr Flynn, munching on a strawberry...
I know - you're reading this now going " uh...duh Amy! " and yes, in retrospect, it all seems so simple to me too. See, i was feeding Flynn on his own, and then Mick was giving him a bath while I cooked our dinner. Even though he was refusing his own food ( the same yummy chicken-and-rice, stir fries and spaghettis that he's always enjoyed ) Flynn would then happily totter over to us while we were eating and demanding stuff off our plates. I explained all this to J and she just looked at me and smiled and said " He's a big boy now - he wants to eat with you ". Doi! Of course he does! Flynns been able to say " big boy " for about a month now and has been doing all kinds of other " big boy " things, like bing allowed in Daddy's garage or being able to walk into the shops ( very slowly ) holding my hand.... of course he wanted to eat at the table with the grown ups. So that night i went home, cleared off the end of our dining table ( yes, we're guilty of eating in front of the tv watching "Neighbours" instead of using the table... ) and proceeded to cook dinner at a time suitable for us all to eat together. That was last Monday, and we've had a blissful week of Flynn eating most of his dinner and throwing none of it on the floor.

Most nights he's eaten the same meal as us ( except when its been a bit spicy ) and he's going really well. I give him a little bowl of stir fry ( for eg ) and he sits quite contentedly, picking up chunks of chicken and bits of vegies and gulping it all down with copious amounts of milk. I even gave him his own little plastic fork last night, just to see how he went...and he was stabbing the little chunks of meat like a total pro! You know, except that he holds the fork like a tiny caveman and has no table manners whatsoever... even better, Flynn even asked for more vegies! He'd picked out all the capsicum and beans in the bowl and was left only with chicken. When he saw me eating a bean he pointed and grunted and i asked him " Do you want some vegies? " and he points again and goes " bej- ees! ". So now, not only do i have a child who is eating his dinner without throwing it AND is interested in starting to learn to use forks and spoons ( or " poons " as he calls them ) but i have a 15 month old who wants more vegies.