I wish i was finding it easier to get past this.
I wish random little things didnt turn my mind to you.
I wish i didnt have to see your car driving around town, or worry about bumping into you somewhere.
I wish i'd never met you.
I wish, in my heart of hearts, that i really believed that.
I wish you hadnt made me feel so bitter. I want to be a better person than that.
I wish you hadnt lied, and kept up that lie, leading me on.
I wish you could see that thats exactly what you did, instead of denying it, and then giving me no chance of showing you evidence of the fact.
And i wish i hadnt found those photos. I simultaneously love and hate the way photos can call up memories. Memories i wish i didnt have. 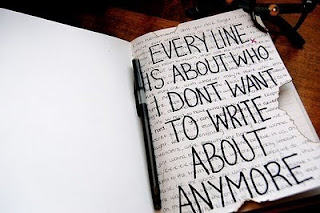 I was cleaning out the bottom of Flynns wardrobe on Friday which, despite being his cupboard, is actually the storage spot for all of my old bills, correspondences and paperwork. There was plenty of crap in there that just went straight into the re-cycling bin but amongst it all i found a folder of photos of me and my ex-best friend. I wish i hadnt found them. For those of you who are new around here or those of you who missed it - my "best friend " dumped me late last year, saying she just didnt want to be friends with me anymore. There are, of course, more elaborate details to it than that ( me sending her a text announcing my pregnancy, her not speaking to me for a month or so and then saying i shouldnt be having a baby, "forgiving " each other, then me being ignored after she fell pregnant and gave birth to her own child and me expressing my disappointment and anger about it here on my blog... you know, just to name a few )but basically, in the end, it came down to the fact she didnt want to be friends with me anymore because, apparently, i'd changed. Not knowing how, or when, this change had come about she said she didnt really want to talk about it, but that the first time she noticed the so-called change and was annoyed by my behaviour was late 2008.

Stumped, i mulled things over. I pondered what i'd done, when i'd done it; i cried myself to sleep some nights and i cried in the shower most mornings for weeks on end; i talked things over, to myself, trying to figure things out. And then, after all that, i re-read through 2 years worth of emails.... and thats when i realised. She lied to me. Despite my angry and ill-thought-out blog post which was pretty much the beginning of the end ( and which i regret ), despite how angry she was at me for it and despite how many insults she threw at me, horrible characteristics she attributed to me.... SHE LIED. She lied to me for over a year and, in doing so, manipulated my feelings. She made me feel like the lowest being on the face of the earth for something as simple as a text message....BUT SHE LIED. She lead me on, and i have proof. I found it, with the photos. A copy of an email ( in regards to some advice i asked her for ), dated 25th March 2009, which ends in the following paragraph:
P.S. At the end of all this, I love that you value my opinion so much, but it IS your life and only you know how you feel so only you will know what's right. Either way I will be there for you no matter what happens. Mwah Mwah


LIAR. She said that, 5 months after i supposedly changed and offended her with my behaviour. 5 months after she realised she didnt really like me anymore. Why would she say that, if she didnt mean it? Why would she then still email me, the same old friendly chat, but deliberately go out of her way NOT to see me when she came home for the weekend? Why would she then, after " the text " and supposed forgivness, play happy friends with the rest of our peers but ignore me? Because she's a liar. And she lead me on, and manipulated me into thinking we were still close, and just waited til all that negligence and ignorance did my head in, and i made a mistake, so she could end the friendship but still be the " good guy ".

And, to be quite frank - thats not fucking fair.
Posted by Amy xxoo at 2:25 AM