Operation Slimdown - We're Getting There... 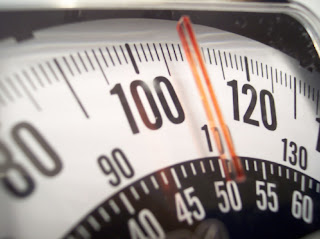 
I'm really happy with that, seeing as i've felt like i've been slacking off a bit. Maybe it only feels that way because i was sooooo strict with the my eating in the first few weeks? I'm not sure, but i'm coming to realise that its ok to have a bit of chocolate, or a small bowl of icecream, or even a yummy yummy Portuguese tart ( mmmm...Portuguese tart... ) a few times a week if i'm keeping everything else under control. Which i am - my portion sizes are much smaller than when i started my third attempt at " Operation Slimdown ", i'm eating way more vegies and i find that i'm not craving rice or pasta at all. I have a nice low-GI muesli for breakfast most mornings ( i occasionally indulge in peanut butter and toast! ) and a wholemeal sandwich or leftovers for lunch. Dinners are my favourite though - you know how i love pour over my cookbooks and magazines and i've really enjoyed some of the new, healthier, dishes i've come across. As has Mick - he hasnt exactly been on a concentrated " diet ", but through healthier eating and a very physical job he's managed to lose around 10kg in the last 3-4 months. Go us!

And now? I'm 9.2kg down in 12 weeks. Only 800g to go until i hit my 10kg goal that i set as my New Years resolution. I'm kind of amazed that i've been able to come this far in a relatively short period of time ( you know, seeing as my original goal included a November deadline.. ). Once i hit the 10kg mark, i would like to push on and reach 65kg - thats roughly how much i weighed when i met Mick, and i think i looked awesome then, so thats the next step in the dance... fingers crossed i lose the 800g by next weigh in though!
Posted by Amy xxoo at 2:15 AM