You often hear the "older " generation say that they remember the days where you talked to your neighbours, where you would hang over the fence and have a chat with the people next door, and you didnt hesitate in trusting them to bring in your mail/feed your dog/water your lawn when you went away. Sadly, these days it seems like a lot of people dont even know what they're neighbours look like, let alone know them enough to stop and chat. You might give each other a small wave as you drive past on your way in and out of the street, but thats about it. But, ladies and gentleman, there is a reason we shouldnt trust our neighbours anymore:


Because they might invite you over for a bbq, be great hosts who supply your very thirsty husband with beer after beer and then..... SHAVE HIS HEAD. 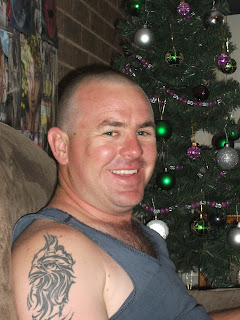 What in the fork has he done to his head?!
Oh yes - the horror. Our previously very wonderful neighbours invited us to a bbq on Saturday night, which we had to decline as we were already going out for dinner. No worries,they said- if you feel like it, pop over when you get home. It was 9pm by the time we got back from dinner and Flynn needed to go to bed, so Mick went over by himself, promising he'd be home by midnight.

4:30am he stumbles in and climbs into bed. Because our neighbours still had their back patio lights on there was a little extra light filtering into our room and I thought there was something a little odd about Mick's shadow. I flick on the bedside lamp ... and there he is, head completely shaved save for a 2x8cm mohawk-like patch in the middle. All i could manage in my bleary-eyed state was " You look f**king ridiculous ", before i rolled back over and went back to sleep. 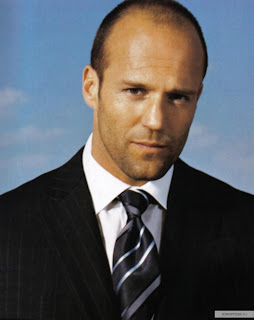 Now this is one close cropped head i'd like to get close to...
As i said to Mick a bit later that morning at a more appropriate wake up time - he's lucky i love him because, man, did he look stupid. I told him he could leave the fluffy mohawk for the rest of the weekend but convinced him there was no way in the world he was going to work looking like that. He's now sporting a fully shaved head, a stupid grin and a proportionately bigger-looking set of ears, whilst my neighbour will never be trusted with my husband again.

( Except if we're invited to their annual New Years bbq, which we will be at with bells on! )
Posted by Amy xxoo at 12:14 AM