'Muse Wars' is a flash fiction/short story game that is hosted by the beautiful Lori over at RRSAHM. The object is write something inspired by the posted image. This month it was: 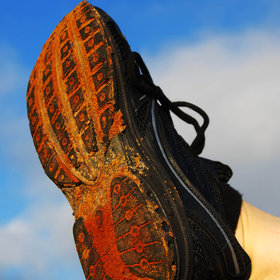 She was running. She may not be wearing the fancy brand name sneakers or exercise gear, but running was sure as hell what she was doing. What she always did - anytime something went wrong, someone said something that hurt her or just when life got in the way, got too hard. She thought if she could run far enough, fast enough....well, maybe it just wouldn't hurt anymore.

But she was wrong. Of course she was. She thought if she just stayed home, stayed away, then she wouldn't run into them and she could pretend she wasn't now an outsider where once she was such a vital link in the chain. She hadn't counted on the impact of social media, of being confronted by them not in person, but in words and pictures.

It was the pictures that upset her the most. When she was feeling thoroughly alone there were always the photos of them, out and about, photos of them making memories she wouldn't be a part of. Photos of them dressed to the nines, laughing, partying, playing the silly games that groups of 'best girlfriends ever! ' are want to play. Things that not only did she not get to do with them anymore, but that she did not do with anyone at all anymore. She hadn't found anyone to replace them, of course - for weren't 'best girlfriends forever ' irreplaceable?

And why? Why was she missing from those new memories, those Facebook photos and Twitter statuses that always gave her a slight pang ( not that she would admit it to anyone but herself )? Because when she should have stayed, and fought and spoke up for herself... Well, she'd run. And she'd continue to run, even though she knew where she was running to wasn't any better, any less hurtful, than where she'd run from.....
Posted by Amy xxoo at 1:18 PM