So you remember so I mentioned in my last post that I'd had a super sewing fail and in was hoping to be able to take that disaster and turn it into something else? Well - I totally did! And just because I love you guys and I actually remembered to take photos as I went along, I'm going to show you what I did! ( And please excuse the atrocious selfies! )

My original attempt was supposed to be an elastic waisted shirt dress. Pretty simple if you can shirr ( which I am yet to attempt ) or if you sew one line of thin elastic through the middle of the dress. The problem was, though, that I mis-measured the width of the dress and I couldn't stretch my elastic enough to make the dress fabric gather enough to fit me. So, after unpicking the elastic three.bloody. times. This is what I ended up with: 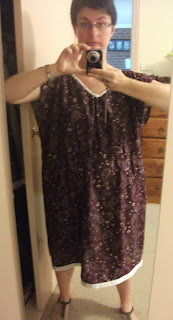 Yes, that is me in a giant freaking mu-mu. That's what I had made myself .... A mu-mu. But because I'm a cheapskate and I didn't want to just waste the money I had spent on the fabric ( a whopping $6 ) I decided to have a do-over. I started by chopping the mu-mu through the middle so that it was a knee length. I then took that bad boy in a good 6cms on each side because, let's face it, it was ginormous!
I then took a plain $4 tank top from Big W .... 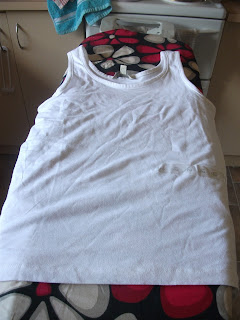 ... And cut it through just below my natural waist. I now had two halves for one new dress! Next step was to set my sewing machine to the longest stitch length and run a basting stitch the entire way around the top of my skirt. By leaving the tails of my thread long after sewing, I then pulled the top thread which gathered the fabric. The trick is to go slowly and gently until the waist of the skirt is the same width as the singlet. Then you slip the singlet inside the skirt, right sides together , waist to waist: 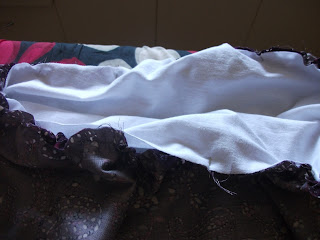 Then you sew together! I set my machine back to a regular sized stitch and straight stitched around the entire waist, making sure to stitch outside the line of the basting stitch, so it wouldn't show through on the front of the dress. When you've finished sewing, and you flip the skirt back down and right side out, this is what you get:

Kind of cute huh? And way better than the giant shapeless sack I'd started out with. Hell, it even looks cute with a wide belt:

And there you be, my first official refashion of a garment. Its not entirely perfect, and its not exactly what I was aiming for in the beginning, but I'm pretty pleased with how it turned out in the end!