Could someone please put me to bed?

Seriously, i'm tired. It wont stop me watching " The Amazing Race " before getting some zzz's, but I am tired. ( Incidentally, i almost wrote the title of this post as Can Someone Please TAKE Me To Bed, but thats a whole different invitation entirely ). Anyways, the past few days have taken their toll, sleepiness-wise.

After having my flight delayed almost two hours on the way to Sydney - and missing the planned dinner because of the delay - my roomie and i were up early for our conference. To be quite honest, i found most of the conference content to be pretty interesting ; since the departure of our national manager we as a staff have had a lot of issues that needed discussing. We got a chance to do that, together, as one big group at the conference. We also got presented with a whole tonne of statistics and figures that i wasnt previously aware of. If there was one complaint - and yes, i have one - its that i and my colleague felt personally picked on. Ever single negative scenario we discussed was done so using our store as an example. There was a lot of questions be pointed in my direction, many of which i cant answer; and issues brought up that i have been trying in vain to solve and i cannot hold much responsibility for because i have inherited them from previous managers. I wasnt given much of a chance to point out what we do well, nor were we given any appreciation for things that we have postively accomplished. There was a whole session of what felt like " Pick on Amy's Branch : The Pity Party - presented by Senior Management ". But hey, aside from that, it was almost bearable.

So after finishing up the conference ( late mind you, but what conference ever runs on time ? ) it was time to get changed and head out to the stadium for State of Origin. I was excited! No joke, for real, havent felt for a long time, excited. Luckily you guys are reading this to yourselves, and not having me read out loud - i screamed my little lungs out and have wound up with a sore throat and slightly croaky voice for my efforts. Unfortunately, it didnt matter how much or how loudly i screamed, turns out my team didnt hear and didnt follow my instructions to :
a ) " Go forward New South Wales !!! "
b ) " Do something it with it boys !!! "
c ) " Don't run it up the middle - spread it wide you idiots! WIDE!!! "

And nor did the referee heed my pleas to get the opponents back their 10 metres, give us a penalty when the ball was CLEARLY raked or to send Nate Myles off for a blatantly obvious dangerous tackle. ( Nate Myles and Brent Tate - dirtiest players in the league ).
Nope, none of that happened and my boys lost the game. Which means we lost the series. Again - for the third year in a row. But I wont give up! I was born a blue cockroach and i'll die a blue cockroach - on to next year! 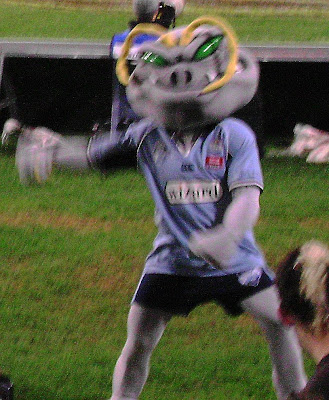 NOTE: Thats a blue cockroach. He's dancing, thats why he's slightly blurry.
NOTE#2 He is awesome, and you know it.
NOTE #3 I catch an 8:15am flight home this morning and spin out! The flight attendant is a good friend of mine from school.... made for a good start to a new day....
Posted by Amy xxoo at 3:45 AM