So i may have mentioned previously that i live in a rural town by the name of Dubbo ( yes, Dubbo - its a funny word. Have a laugh ... ). And those of you living in Australia, and especially in New South Wales, may have heard that Dubbo is currently experiencing a liiiiiiiiiiitle bit of a flood problem. Farmers in the middle of harvest have lost almost all the crops they still had in the ground, people in low-lying areas close to the river have had either there land or the homes water-logged and, most inconveniently ( read: sarcasm ), people living on the west side of town now only have one bridge to use to get home instead of two because the lower-lying bridge has gone under water. Fear not though - I and my family are safe. And not only safe, but happy.... because its looking likely that i wont have to work on Monday! Hooray! See the shopping centre where i work has had its carpark completely flooded, and because all the electricity, sewage and gas controls are in the underground carpark, all the stores need to shut down until the controls can be used again. Woo! Wana see some evidence? 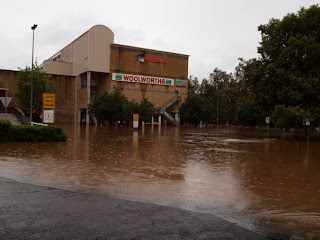 The carpark of the shopping centre where i work - totally underwater! 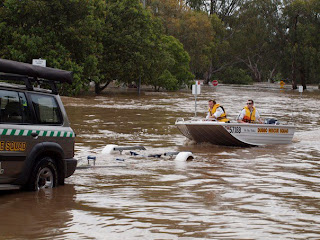 Some rescue workers cruising their boat up the street where i usually drive... 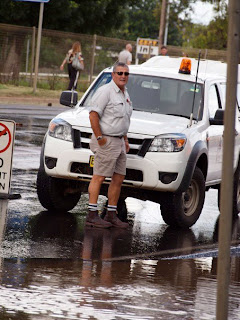 My dad, hard at work. He might need a snorkel soon!
*Note* - all pics courtesy of the awesome Speaking OneThousandWords Photography. Look her up on Facebook!
Posted by Amy xxoo at 2:11 AM