I know I’ve said this a few times but – I really feel like when I step on the scales at the end of this week I’m going to have PUT ON weight. I’ve had a bad week – no exercise, not enough of the right foods. I found myself amazed that I could have been so strict for those two weeks at the start because this past week I have caved in for all the wrong things. Flynn is too little too eat a full Freddo frog – oh hey I’ll just eat the other half! I couldn’t be bothered making up a salad – no matter, I’ll just eat two pieces of toast with peanut butter! Gee Subway is tempting – nah, I’ll have Hi-GI sushi instead! See what I mean – my head has totally been struggling with the right decisions this week. 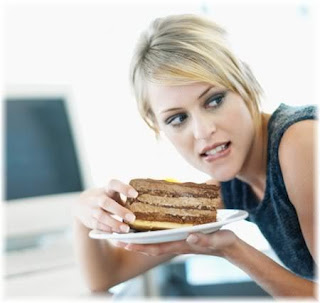 Like last night – I ate the hugest piece of steak I’ve ever seen. They didn’t look that big when I bought them but looking at them on the George Foreman grill ( hey, at least I’m still knocking out the fat! ) they looked enormous. But did I cut in half and save some for lunch today? Umm, no, I just went right on eating that delicious side of cow. I’d feel better about it if it were a one-time slip up, but its not, and I’m worried that once I hit my goal I’m going to slip-slide right back to the “wrong” decisions. Like once I’ve hit my goal weight my mind will go “ Ah, we’ve reached the end! No need to try so hard anymore! “. Its sobering thought.

On the flipside, nor do I want to be one of these women who is obsessed by food, who knows exactly how many calories and how much fat is everything, and who is too afraid to indulge once in a while. A nice, normal, balance is what I’m aiming for – I guess the occasional bad week is all part of that. Right? Right?
Posted by Amy xxoo at 1:12 AM