Sometimes You Have To Stop Running.

Getting picked on. Tormented. Harrassed. Bullied. I'm sure its happened to all of us, in varying degrees. Its certainly not a new phenomena, and nor do i see it being phased out anytime soon. In fact, i'm pretty sure bullies will still exist when Flynn makes it to kindergarten ( 4 years from now ... ). So - just how do i raise my child to deal with childhood bullies? 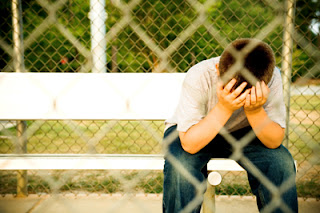 Of course, i bring this up now because, like most people out there, i've seen the video posted on YouTube last week of a Sydney teenager fighting back against a bully. I only watched it the once and, yes - it made me wince. The young boy that got thrown to the ground did not look too well when he tried to get up. Did i sympathise with him though? Umm, no, not really. Its hard to sympathise with a kid you just watched taunting and punching another kid, even if he did get body-slammed in the end. In fact, i'd even go so far as to say he deserved it.

I dont want to offend anyone, or start some huge parenting argument but.... i think its ok to defend yourself when someone is hurting you. Even if that means you have to hurt them back. Shock horror! I'm not talking about little children - if Flynn ( now 15 months old ) hits another kid at mothers group or at the park, even if they pushed him first , then i tell him we dont hit, its not nice. I'm talking about children and especially teenagers, who are old enough to know better. I'm also not talking about a one-off school yard fight - you can be the bigger person and walk away from those.

I'm talking about long-term, systemic belittling and physical violence. I'm talking about having to go to school everyday knowing that some kid is going to walk up and punch you for no reason, or dak you in the playground just because he can, or who is going to yell things at you on your way to the canteen. You shouldnt have to put up with that. And its all well and good for some parents to say " just tell the teacher " but really, in todays society, what will ( can ) the teachers do? Give the bully a warning? A detention ? A suspension in the worst cases? All of which just results in the bully getting a holiday and the victim getting " Dobbers wear nappies! " from ever other kid in the school yard.

So Mick and I are going to teach our children that if someone is constantly harrassing them, teasing them everyday, kicking and punching and bashing them up.... then its ok for them to fight back. Its ok for them to be the better man and walk away time and time again but, if, eventually they implode and they've taken all they can take then yes.... its ok for them to get a punch or two in, just to give the bully some of their own medecine. To show that they have strength too, and that they arent afraid. Walking away is the nicer option, but some people just wont let up until theyve been stood up to. I know that if it came down to my child body-slamming their tormentor in a moment of rage, or bottling it all up until he killed himself, just to escape....well, a school yard punch up doesnt look so bad, does it?
Posted by Amy xxoo at 1:56 AM