Blah - this weekend was a total write off, blog-wise. I had this compulsion to sit down and write, but every time i opened the lap top there was....nothing. Nada. Zip. I couldnt think of a single interesting thing to write ( interesting being the operative word ). So, in the absence STILL of anything much interesting to blog about, here is a short list of things i considered, but than thought better of: 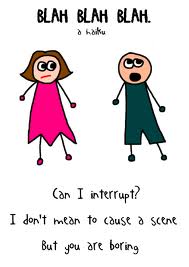 Image from here
* I could have gone a whole big spiel about how Joe from " The Biggest Loser " has an attitude problem. Which he does, big time. Someone needs to tell him that the world doesnt revolve around him, and be nicer to Nathaniel ( even though he's a cry-baby ).

* I could have written a sob story about how everytime i have something on for the weekend i get a cold. Which i do, but i already used that as a Facebook status. Let me tell you, attending a double christening after taking too many cold and flu tablets in an effort to perk yourself up is no fun at all. If everyone in the church has seen been inflicted with the lurgy, i wouldnt be suprised...

* I could have told you how beautiful Flynn has been lately, and how proud i am of him. Which i am, but i did that last week. In a new development since then - my son has FINALLY decided he's going to walk! - and he's really turned into Daddy's little shadow. I love watching the two of them together. Too cute!

* I could have done a review of " One Flew Over The Cuckoos Nest ", and compared the book to the film. Which i rewatched, after finishing the book, only i didnt have the energy ( see the point about having a cold/flu ) to sit down and be really eloquent and descriptive. And stuff.

* I could have shared some of my extensive internet "research " into interesting ideas for wedding centrepieces and bombonieres. Which I have been doing, on and off, for weeks. I am using the help of an events planner but i wasnt entirely happy with the flowers she used in the sample centrepiece she made up. And, even though she assures me the colour would be different on the day, now i'm just not sold on the whole idea. And as for bombonieres - any ideas?
Posted by Amy xxoo at 12:23 AM