A ( Long ) Weekend By The Numbers

Its been a while since i've done a Weekend By The Numbers post ( the last one was in October of last year! ) and, seeing as i'm not inspired by todays #Trust30 prompt, i've decided to skip it and do a weekend run down instead.... 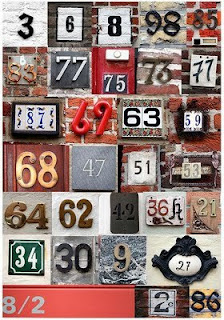 Image from here
1 - date gone on with Mick. Oh yea, we left Flynn in the very capable ( and loving ) hands of my parents so we could go to the movies together.

3 - movies watched this weekend. " Pirates 4 " at the movies with Mick, " Shrek Forever After " at home with the boys and " Black Swan " at home by myself. Can i just say - Nina from "Black Swan "? Total nutcase...

140 - dollars spent on two suits and two ties for Mick and his best man for our wedding. They were business suits marked down from $200 at Lowes - oh yea, we are awesome savvy shoppers!

10 - blissful hours of sleep on Saturday night, when i had the night to myself. Mick had gone away to his brothers for the night, and i asked my parents if Flynn could have a sleep over so i could have sometime to myself... and they said " of course! " so i gotta to sit home Saturday night, watch " Sister Act2 ", Twitter, blog, read some of my book ( " Deliverance From Evil " by Frances Hill ) and eat icecream....all whilst being uninterrupted!

7 - hours spent in the Emergency ward early Monday morning with Flynn ( and his teddy bear, Bruce ). He'd come down with croup (again - this is the 3rd time in about 9 months ) so i had him in bed with me so i could monitor his breathing. He'd had the cough before, but never the horrible, wheezing stridor. At 1:30am he sat up, crying, trying to get in air but all you could was the squeak as the air struggled to get down into his lungs, and he was twitching his limbs and hot all over. I hastily put on my slippers, warm dressing gown ( and, strangely, my bra... ) and took him straight to the hospital. They put him on some nebulised adrenalin to open the airways, and then gave him a shot of steroids to help keep them open. 4 more hours of monitoring ( and trying to sleep on a narrow ER bed... not.comfy. Jan ) and we were allowed to go home... and, thankfully, he was much better last night. ( Oh, and in case you were concerned, Bruce the teddy has hit ears and his heart checked and he is ok aswell ).

25 - dollars my Mum spent on a pair of boots for me, just 'cause she wanted to by me a present. You have to love the specials at Rivers - boots that were originally $80 for $25? yes please! And oh - thank you Mum!

50 - approximate number of times Flynn has said " Luff you Mummy! " this weekend. Some when i dropped him at Poppy's for his sleepover; some at the hospital when he was all upset, cuddled up on my lap; and a whole bunch yesterday afternoon when he had his strength back a bit, running around the loungeroom like a man man. Gotta love those 3 little words....
Posted by Amy xxoo at 3:07 PM