The Week That Was

So - you may have noticed that not only did i go AWOL for the four days that i mentioned i would be Rockhampton, but that i also gave myself the rest of the week off from blogging too. As much as i like to keep things up to date, to keep the posts coming and the blog chugging along, i think i need a wee little break every now and again. But what did i get up to with all that spare time away from the blogosphere?


Monday: Dropped Flynn off at daycare. Did not get so much as a " Goodbye Mummy, i love you ". Cursed him under my breath for being such a turd. Got dropped to the airport, checked in ( along with my partner in crime, J ) only to find our fligh out of Dubbo was going to be 40 mins late. Made it to Sydney, checked in on a different airline, met up with the 4 other NSW staff members headed to the conference, and wolfed down some Maccas in time to make it to our gate for boarding to Brisbane... and found out this flight would be 40 mins late. Spent the majority of the flight wondering if we would make our connection to Rocky. Got there just as boarding opened, caught my third flight for the day and landed in Rocky pretty much on time. Dinner time actually. Checked into our rooms, freshened up and met Queensland staff members for tea. Not enough meal allowance to order dessert ( boo! ). Head to bed absolutely exhausted. 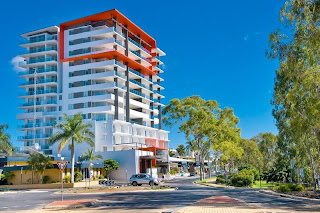 Our accomodation - The Edge
Tuesday: Full English  style breakfast ordered at 8am, made the conference room at 8:55am. Actually interested in the mornings presentations. An hour for a pub lunch - at a table of 19 managed to sit myself across from the chattiest staff member there. Get a case of threethirtyitis mid afternoon and struggle to stay awake in front of the boss. Break for the day just before 5pm. Back to the room for a freshen up and a dose of Music Max. Meet 6 other keen staffers for diner ( the rest were pikers - boo to them! ). Find a great boutique pub bistro and have one the nicest dinners i've had in a while - including dessert! Order the apple tart tartine and am gobsmacked when it is not just one slice but the WHOLE BLOODY TART. Do the best i can to tackle it but, even with sharing a piece, can only manage to finish two thirds. Can barely walk back to the motel... am too full of apple tart. 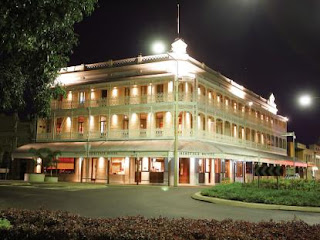 Home of the best apple tart tartine ever - The Heritage Hotel, Rockhampton
Wednesday: Bacon and egg breakfast ( again ) ordered at 8am, made conference in time to get the seat right next to the national boss. Yay. Dont mind so much as very interesting round table discussion til morning tea, and then discussion on customer service. Big boss puts confidential notes in front of her on the table - apparently thinks that i either cant or wont sneak peeks at it when she isnt looking. Lunch at the same pub. I dont know how but i manage to get the seat next the big boss at lunch aswell. My salmon is slightly overcooked but the lemon/lime/bitters goes down well. Stay awake and alert for the last afternoon session. Finish the book i started on Monday before dinner. 17 of us head to the same boutique pub as Tuesday night. After a lovely chicken scallopine i decide to tackle the apple tart again. This time make it two thirds of the way through by myself. May have finished the whole thing if it werent for few Midoris i'd already consumed ( yay for open bar tabs! ). Make it back to the motel despite my enormous apple tart belly. Repack suitcase - couldnt be arsed doing it at 6am. 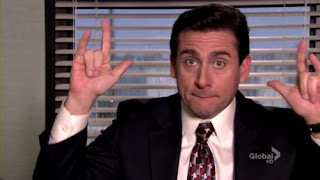 This is NOT my boss - ha ha, i wish!
Thursday: Up at 6am and at the airport an hour and 10 minutes early for our flight, thanks to a particularly edgy staff member. Grab a crappy airport cafe breakfast ( tastes like cheesy cardboard ). On and off our first flight before the time i would usually leave for work. Potter around Brisbane airport and invest in a new book. Also bought $11 worth of mixed lollies ( rip off ). Brisbane to Sydney is uneventful - so uneventful in fact that i manage to drift off for a half hour nap. Grab some lunch with J, do a couple of laps of Sydney domestic and then settle in at our gate to wait for boarding. Actually have a flight with REX that arrives AND leaves on time ( incredible! ). Spend the flight trying to rest but giggling at the conversation from the couple behind me ( work in tv production, bitching about their bosses, filming out west, planning on driving to their destination 4 hrs from Dubbo at twilight - bad idea! ) J and I were two of the last people off the plane but the first thing i notice is Flynn pressed up against the terminal window, marvelling at the plane. Once he notices me he gets all excited and runs towards me as fast as his little legs will carry him. One huge mummy huggle and short drive later, i get tea cooked for me at my mum and dads. Mick drives us back to our place where, after putting Flynn to sleep, i collapse into bed, totally cactus.

Friday: A regular day at work, except that we're playing catch ups from the four days we were away. Barely have time to scratch myself. Make up a batch of spag bol for tea because, frankly, i couldnt be bothered doing gourmet. Again, i hit the sack before 8:30pm. Around 10pm i hear Flynn wake but Mick is still in good daddy mode and goes to him, and ends up sleeping in Flynns big boy bed with him. Good job Daddy - a calmed child and i get the whole bed to myself!

Saturday: Am gifted a sleep in by my gorgeous fiance. Feel so rested up on waking that i finish our shopping list while i tuck into my cereal. Go out and buy some new work shoes while Mick goes down to his shed and washes his work truck - meet back at home and then head out for groceries. Pop to the neighbours with Flynn for a quick visit when we get back. Flynn loves the little girls and teh dogs next door, so far is a bit scared of the mum ( big sook ). Once he figures out that K has swings, a trampoline, a pool AND can ply him with lollies they'll be good friends. Lots of cleaning and clothes washing done in the afternoon. Made some yummy chipotle chicken wraps for tea and watched " Monsters Inc " before bedtime. No wild saturday night for this little black duck!

Sunday: Flynn gives Mick his Fathers Day presents in bed, but instead of saying " Happy Fathers Day " he says " hello Cookie bird! " ( methinks he was dreaming about his aunties talking parrot... ). Go out to local nursery/cafe for Fathers Day brekkie with my parents, my younger sister and my brother and his family. Yummy French toast and fresh orange juice. Also lots of being dragged by the hand to see the fish in the pond. Flynn lets a combination of teething and finally becoming clingy ( which i thought he might, once i came back from Rocky ) turn him into a complete and utter feral child. Combination of sookiness, squealing and toy throwing drives me up the wall. Manage to get him to fall asleep after an hour and half on my lap. More sookiness when he wakes up which thankfully wears off when we go to my parents for bbq dinner. Good food, big laughs. Come to the conclusion that both my son and my father may just be nuts. Still, settle into warm bed to watch " Underbelly: Razor " with a big smile on my face....
Posted by Amy xxoo at 3:33 AM