So after yesterdays news i've been keenly aware of and crazy in love with my son today. I felt a pang in my heart for what my friend has lost, and couldnt help but imagine myself in her situation. It did upset me for a little while, and then it made me want to run to my son, scoop him up, and never let him go. Of course, that just isnt possible ( especially not with such an active and wriggly toddler ..... ), as much as i wanted it today. 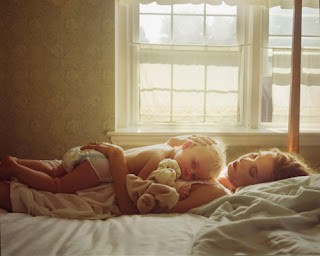 Image from here
What i did do is just took the time to really be with him - not just in the same room, not just absently mindly playing with him whilst thinking of something else but actually "being" with him. We had a playdate with another mum from mothers group during which i let him run and play and do his own thing but the rest of the day i made him my focus. Even when out shopping with my sister i made a point of talking to him, doing wheelies with him in his pram, rubbing his hair as we strolled - little things that made me feel connected to him.

He fell asleep in the car on the way home from the shops and i put him gently in his bed. When he woke after half an hour a bit distressed ( he's cutting his canines and they arent playing very nicely... ) instead of shushing him for a few minutes and then shutting the door i climbed into his bed with him, snuggled in under the doona and we had a nap together. Its been a long time since we've had a nap together and it felt good. Not only to get a bit of extra rest, but to have that snuggly, warm, bonding moment that i'm sure will be less and less frequent as he gets older.

Once he finally gets to sleep tonight ( again, those teeth are playing havoc ) i might go in and steal one more baby kiss before heading to bed. I'm just hoping my own sleep tonight is less restless than last night, when i couldnt seem to shake the sadness of the " what ifs? "....
Posted by Amy xxoo at 3:16 AM