Even Artichokes Have Hearts....

Time for this weeks Blog This! challenge. See the bold for details:
What film has inspired you, changed you or the way you think, maybe put you on a new path?

So - for those of you who dont know, i like to consider myself a film buff. I dont have as much time these days as i would like, just to be able to sit and take in a new film. I've kind of slipped a little - in the year 2005 i watched over 200 films that i'd never seen before, now that number might be closer to 20 a year. Poo to that. The point i'm trying to make though is that this challenge was going to be hard for me. I've seen so many films, and had so many touch me in some way, that it was going to be difficult to pick just one. I had a few come to mind : " Hotel Rwanda ", " American History X ", " El Diarios De Motocicleta ", " Benny and Joon ". The one i settled on, however was.... " le Fabuluex Destin D'Amelie Poulain ". Or, just simply ( in English ) - " Amelie ". 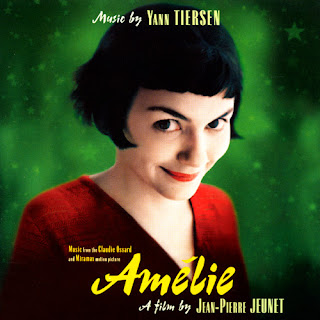 I just simply adore this film. I love everything about it - the colour, the music, the whimsy, the beautiful Audrey Tatou. But their are two reasons i chose this film: because it made me believe that no matter how odd or weird or different you think you are, there is someone out there who is right for you and who will love you for the crazy that you are.... and it made me want to say " yes " more often.
See, Amelie is this gorgeous little Parisian women, who has a quirky father, works in a cute little cafe with an strange assortment of oddball characters and likes to pretend things in her head. She sends a garden gnome on a round the world trip, likes creme brulee and, like most women, she dreams about love. I related to her even though we had only half those things in common ( pretending, dreaming and cream brulee ). I liked that she was cute and quirky and kind of lived inside her own head a bit. I liked that she had a wicked sense of humour. And i liked that, when she had the opportunity, she took the bull by the horns and went after that perfect love she had been dreaming about. And she got it and all was right with the world. Amelie found Nino, and all because she was brave enough to say " yes " to life.
And what happened when I was brave enough to say " yes " to the opportunities that came my way, and stopped being so afraid of where " yes " may take me? I met a gorgeous man who is now my fiance and i have a beautiful baby boy. And all is right with the world.....
Posted by Amy xxoo at 10:50 PM