You Gotta Be In It To Win It

The lottery that is. And i'm not usually - i might buy a lottery ticket once or twice a year, so its highly doubtful that i'll ever win the big bucks but, for the sake of a blog post, lets just pretend that i did win big. Say $50 million dollars big. What would i do with it ? ( NOTE: i totally stole this very simple idea from Erin @ Motherhood Y'all ). 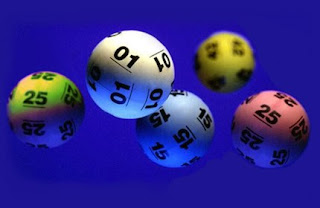 #1: Umm, boring - i'd pay off my debts. Which, for me, means my mortgage, my car loan and a couple of hundred dollars on a credit card. I'd also pay Mickey J's debt and our immediate families. Way to get in the good books right ?

#2: Pay for my wedding and honeymoon - we still havent set an official date yet but Mick and I plan on getting married sometime around September or October next year. My parents have a bit of money set aside to pay for it all but i'd much rather pay for it myself. Either way, whether we had $1000, $10 000 or $1 million dollars, it wont be an extravagant affair. We're just not that kind of people. Beautiful dress ? Yep. Pretty location? Yep. Good food? Yep. Should it cost the price of a new car ? Umm - nup.

#3: Buy a new house - for my little family ( we currently live in a two bedroom duplex that i - or the bank - own ) and one for each of our immediate family members. That way, after having already paid off their debts, they could have a new home to live in and one as an investment property to earn them money. Tricky....

#4: Set some aside for my children - well, i only have one at the moment but i will have more in the future ( i'm like 99% sure ). So i'd set aside a big lump sum as a trust fund, say one that couldnt be touched til they were 25. I would hope by then that they'd figured out their priorities in life and then they could put the money to good use. You know, instead of blowing $50 000 on booze and parties and sexual liasions. Which is all fun, just not what me as Mum would want the money spent.

#5: Investment - i dont really know how the investment market works so i'd have to get some help with that, but i wouldnt wanna blow all my moolah on junk. I'd be smart enough to put some into stocks, or into the property market ( or, you know, whatever ) so that i could make money off of my money. I don't mean for that to sound greedy, but you'd do that too right?

#6: Give to charity - maybe a $100 000 or so. I'd give to a few different causes : Westmead Childrens Hospital in Sydney, Careflight, The Jane McGrath Foundation.... things like that. I might give some to a foreign aid charity, but only after i'd fixed up some Australian interests first. I'm not against foreign aid ( i've sponsored a child through World Vision for 9 years... ) i just would like to give to a charity this is going to help in my community first, thats all.

#7: ( Lucky last ) Living allowance - i'd quit my job so i could be a SAHM for a while ( until Flynn and any subsequent children were at school ) so i'd need to allot some money to the day to day running of our house. Maybe $80 000 a year? Thats more than what we live off now but its not flashy - enough to cover bills and neccessities but with a little extra for luxuries and holidays. Yep, that sounds about right.

So how about you guys? Where would your Lotto winnings go ? ( Oooh, and speaking of winning things, head over to Blog This! and vote for me in this weeks poll. Please!?! )
Posted by Amy xxoo at 5:35 PM