Handbags, shoes, jewellery.... if i could afford beautiful designer things, i'd have some. Designer is nice. What is designer, yet not nice? Designer babies.

Yep - designer babies. I know the debate has been had before but i watched an article on " The Morning Show " this morning that had my blood boiling. It was a story about how the ever-controversial website http://www.beautifulpeople.com/ has started taking "genetic donations " from its members, so that childless couples are able to use eggs and sperm that will result in attractive children. Basically the representative of the website, Greg Hodge, argues that attractiveness is an essential quality in todays societies and any couple using donor genetics, that wants the absolute best for their child, would choose to donations from his members. 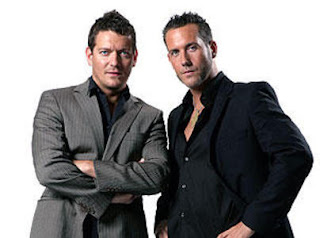 Greg Hodge is the pretentious looking cock in black. Wanker.
I have never heard a bigger load of crap from a bigger egomaniac in my life. First off, what kind of shallow wanker starts a website exclusively for beautiful people, christening himself beautiful in the process? Second of all, each and every child in the entire world is beautiful to someone - my son is the epitome of gorgeous to me, but i think my friends baby falls into the " Not cute " category. Her mother, however, thinks she is the most beautiful baby to have ever graced the earth. Parents do not need to select physical characteristics ( down to specific hair and eye colour ) to find their children beautiful.
Also - whats "attractiveness"? Greg Hodge kept emphasising "attractiveness " as incredibly important - but attractive to who? You? Me? Him? There are literally billions of people on this planet - billions of whom i personally would not find in the least bit enticing. But i;m sure someone does. Take Larry King, the American talking head, for example - so NOT my cup of tea. He's old, and wrinkly, and reminds me of a lizard who's seen too much sun. But the man has been married 6 or 7 times ( or somewhere in that vicinity ) so clearly there have been women who have found him attractive enough to be involved with him. Kate Moss - skinny, no breasts, pinched face. In my opinion that is. And thats not the kind of attractive i'd like to be, but fashion execs and men everywhere think she's the bees knees.
What i'm trying to say here is that " designing " your baby, based simple on looks, is not only wrong ( IMO ) but shallow and ridiculous. Also - Greg Hodge of http://www.beautifulpeople.com/ ? Complete and utter cockwad.
Posted by Amy xxoo at 10:44 PM