Ooh, my first post for 2011 - how exciting! Except not really, because its one of the obligatory " New Years Resolution " posts that every blogger worth their salt is doing. Mine probably wont be all that much different, but what the hell ? Read on anyway! 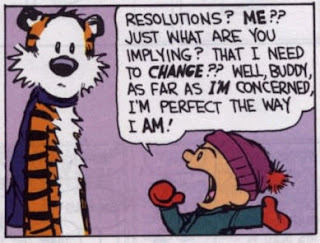 #1 - The Conceptual Goal - that is, the thing that i would like to work on whose success and/or failure can not really be physically measured. ( You still with me ? ) Last time i went with the whole abstract, emotional, personal goal thing was 2009, a year in which i promised myself i would say " yes " more often than " no ", thus opening myself up to opportunities i would normally have missed out on. And what did that get me ? A gorgeous fiance, and a crazy, cheeky, spunky baby boy. So the whole conceptual thing kind of worked out for me. So whats the brief for this year? To honestly speak my mind, instead of hoarding emotional crap until i explode in a sudden, and fierce, inferno of rage/jealousy/melancholy. So there you have it - this coming year i will actively try and let others know how i'm feeling, when i'm feeling it, instead of trying to hold my tongue in a vain attempt to keep everybody happy ( everybody except me that is ). I have learned the hard way over the year just gone that no matter how much you hold in, no matter how you want to keep the peace, that sometimes its just not worth it ( and some people will never be happy, regardless of what you do, so you may aswell just get the truth out there from the start ).
#2 - The Physical Goal - that is, as opposed to the conceptual, the thing i would like to work on that whose succes and/or failure, can be seen, felt and measured. Like... wait for it.... weight loss! Oh yea, me and a bazillion other people around the globe, all jumping up on the weight loss bandwagon. As you know, i'm already on that particularly slow thrill ride, but my resolution is : To stay on the path to weight loss, to accept that it may be a long, slow journey, and to hit my pre-pregnancy weight of 67 kilo before November 5th. Which, for those of you cant remember, or do not know, is the date of my wedding. So that gives me roughly 10 months to lose 8 kilos-ish. Thats an achievable goal, right ? I think going into the second hase of Operation Slimdown back in September i was under the impression that the whole weight loss game would be a bit easier. What i forgot is that i'd had a baby and had nowhere near as much time i'd previously had to dedicate to exercise. Now, i think i realise its going to be a little more slow going, and that if i just persevere i will make my goal and be gaaaaaaaaaaaaaaaaaaaaawjus on my wedding day!
Posted by Amy xxoo at 2:45 PM