I want to thank you for taking a sickie today and leaving the rest of us in the lurch. Not that we were entirely run off our feet or anything like that, but rather its the manner in which your sickie has been taken that has got my goat.
I want you to repeat after me: Honesty is the best policy.
And try this one: Mental health days are nothing to be ashamed of.
Methinks the better idea - rather than chuckie a sly sickie whenever you feel a bit stressed, which you plan on doing on a fortnightly basis from now - is to be honest from the start. That way you wont be getting anyones nose out of joint, and neither will you look like a big, fat, dirty, sneaking liar when you get busted.
Busily yours,
Me 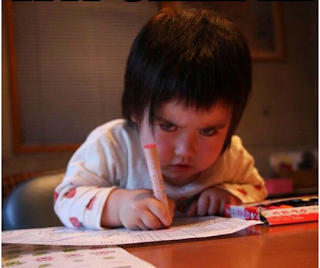 This may be the look i will give him from my desk tomorrow...
Let me explain - one of my co-workers has decided that from now on he wants to take weekly/fortnightly sick leave days. His counsellor has recommended it, and is willing to write him a doctors certificate for every mental health day he takes. This has really got my back up - not because i dont believe in mental health days ( as a person who has lived through depression and still struggles with depressive episodes, i very much appreciate a day off in the name of keeping sane ) - but rather its the way he's chosen to go about having these sick days thats got me all cranky. He is, for lack of a better term, lying about them, and expecting us to do the same ( and just accept that thats what he's doing ). Instead of going to our regional manager and saying " Hey , here's the situation, i'm stressed and a health professional has recommended time off " and organising a functional way of taking some time off, this co-worker is just going to ring in sick from time to time, and expect one of us to say he has a stomach ache/migraine/diarrhea. And when our managment very quickly get suspicious of all these random sickies - not only will he have to tell them the truth anyway, but then he'll look a selfish little whinger who's only looking out for himself.

Part of his stress has to do with the fact that we are very short-staffed around here - but rather than do things honestly, admit that he's having a problem, and hopefully have some alternative arrangments made... well, he's just leaving us in the lurch. Leaving us more short-staffed than we already are. Doing the same thing to us which is stressing him so badly. I'm all for looking after yourself but i'll be frank - what he's doing is rude. And disrespectful. ( Especially in light of the fact that another staff member was told by her doctor to take time off and she declined because she didnt want to leave this guy in the position he has left her ). This guy doesnt have a good work ethic at the best of times, so this whole " I'll just have sickies whenever i want, the rest of you be damned " attitude has only served to further raise my hackles...

What do you think? Should employees be upfront about their need for "mental health days " ( as advised by a medical professional ) or is it ok to just chuck a sickie and expect the rest of your office to shoulder the load?
Posted by Amy xxoo at 2:35 AM