Time To Be Challenged!

So - remember my conceptual goal for 2013? To focus on being better, but knowing I won't be perfect? Well, part of that for me was definitely a want to be a better mum and a better wife. Its not that I felt I'm 'bad' at either of those things but rather that I felt I could do more if I felt better physically. I've been quite tired the last few months - and yes, I know I have a 5.5 month old baby who still wakes for a night feed, but its more than that. Its a lethargy that I just can't seem to shake, that hits me around lunchtime and I just feel blah. I thought I might be iron deficient but after blood tests it turns out I'm not. So... I thought on it, and decided a small change in diet and an exercise shake up were in order. And, not two days later, an awesome opportunity fell in my lap...

Two opportunities actually. Firstly, one of the beautiful mums from my Facebook mothers group is a personal trainer, running fitness groups and boot camps in Melbourne. She posted a message on our board saying she was wanting to trial offering an online personal training program, similar in scope to the Michelle Bridges 12WBT , and was hoping some of us other mummies would be her guinea pigs. Cue me raising my hand and jumping on board! So tomorrow I officially start my 12 week program ( which I can't link to because its a closed Facebook group ) and though I am cacking my dacks I'm also a bit excited! 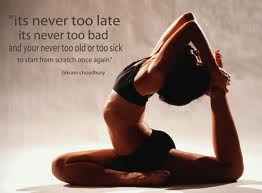 Then, the same week, Bettina over at Little Old Souls had decided she was going to set herself a yoga challenge, based on a book she had been reading, and wondered if anyone would like to join her? Cue my second hand raise! I loved my yoga before my children were born ( so much so I had started saving money so I could pay to train as a yoga instructor ) but my practice fell by the wayside as I headed into the 3rd trimester with Flynn, and I'd never picked it back up. I thought not only would this yoga challenge be a great way to ease myself back into yoga, but it would also be a great compliment to the 12 week fitness challenge aswell. My aim is to do a 20 minute routine 5 days a week, and to build on that as I get better ( or if I have the time up my sleeve ).

So - have I bitten off more than I can chew? Am I being too ambitious? Only the next 12 weeks will tell but I think as long as I focus on doing the best I can and not on being 'perfect' at it, I think I'll do OK!
Posted by Amy xxoo at 9:24 AM