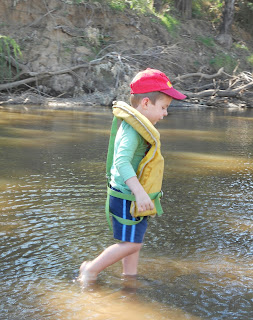 Flynn - a boy in his element 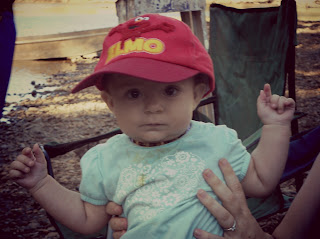 This weekend my sister and her boyfriend invited us to spend the afternoon down at the river with them, just relaxing on the bank and generally watching the world go by...and, seeing as it was a beautiful day we packed the kids, some snacks and some tunes in the car and followed them down to one of the local reserves. We'd never taken the kids to the river before but we shouldn't have worried about anything - that boy of mine could not have been more comfortable if he'd tried. He really was in his natural environment. It was safety vest on, gumboots off and then he was splashing along the rivers edge, throwing rocks into the water, taking his first ride in a tinny and having his first attempt at catching a fish ( we caught some leaves, but that was it ). To be honest, we all had a great time and I can't wait to do it again - only this time I'm catching me a fish, whether they like it or not!
Linking up again with CheAndFidel for the 52 Project...
Posted by Amy xxoo at 1:07 PM