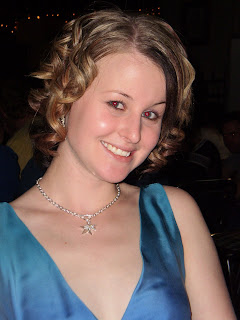 So that, right there , is my beautiful sister Erin. Doesnt she look cute? The angle of the eyeborws looks slightly wicked, but thats how she is really. So, just in case any of you have been living under a rock, or reading my posts without actually understanding them, this past Friday was Erin's 18th birthday. I am slightly sad to say that the weekend was a bit of a bust for me, but very happy to say she partied hard and loved it all ( after all, her birthday is about HER, not me ). Let me explain:
I'd taken the day off work on Friday so that we could hang out - i thought it might be nice to share the whole day with her, plus the idea of a day off for any reason was appealing. So while she was having a facial and a massage i hit the gym, and then we met back at home so we could go out for lunch. Not just any lunch mind you, but " $10 Tradie Lunch ", the best invention in the world. Basically one of the local pub bistro's offer a choice of meal, plus a drink, for only $10. I had the best chicken carbonara EVER - seriously - and enjoyed the company of my mother, my sister and her best friend.

Next on the agenda ? Tattoo time! Now we all know that i have four tattoos ( you knew that, right ? ) but i think i started a trend in my family. Since i got my first one, my father and brother have both been inked, and now it was Erins turn. She had to wait, legally, until she turned 18 to get tattooed but, in a stroke of genius, she decided to ask my parents if she get a tattoo as a birthday present - that way she wouldnt have to pay for it. And they agreed - well done little Erin! So my father and I went with her, less for moral support and more so we could witness the looks of mild pain and agitation on her face as the job was being done. Does that make us nasty ? No, just family. The tattooist Paul is a sweet guy though so he was always enquiring whether she was doing okay, did she want to stop for a break, stretch her legs, things like that, so he didnt make to easy for us to get inside her head. Incidentally, in a brief taste of D-list fame, Paul holds the world record for the longest tattooing session ever ( 42 hours people ).... take that " Miami Ink" !

So after lunch, the tattoo session and the traditional gathering for birthday cake ( caramel mud cake... uh, yum.... ), the immediate family went out for dinner. Witness below the astonishing beauty that was us ( ahem... yea, right ): 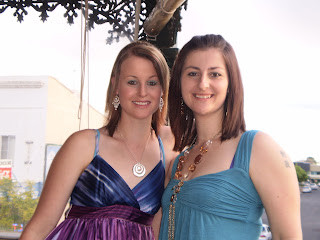 So thats her and, uh, me posing for a happy snap before the dinner arrived. For the record, my garlic chicken and prawns was lovely, thank you for asking. The place we went for dinner is a balcony resturant above my favourite pub, so it has a great atmosphere and made it really easy to move on after dinner. My heavily pregnant sister-in-law, neice and my flu-ey father went home after we'd eaten, and myself, my mum, brother and little Erin headed downstairs. Friday nights are always a little bit of a bust - i'm glad she wasnt completely geared up for a huge night, because Fridays tend to be a little quiet and the problem with eating out before hitting the pub is that there is usally a period between the end of the meal and the point in the night where other people start turning up. That period is the one that gets you - you get bored waiting for some action to arrive, and if your a birthday girl who woke up really early and has been running around all day you start to get a little tired too. So we had a few quiet drinks and decided to head home around 10pm. Kind of an early time to be calling it an evening, but my brother had to work in the morning, my mum is NOT a party animal,and the birthday girl was happy to have been able to get a few drinks in with her nearest and dearets. Aww, bless.

Which leads me to Saturday: 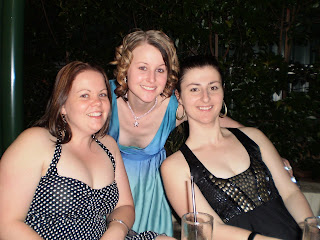 Nevermind the fact that I look completely washed out in that photo ( if you could get closer I had really sweet gold eyeshadow and black liner... it was cute! ) but, for me, the night was a bit of a washout. I was really looking forward to it - my best friend P ( thats her in the dots ) was going to be home, it was going to be my sisters first big night out and my first big night out for 6 months. And for a while, it was great: P and I had a great dinner together and then joined my sister and some friends at the pub. We started having some drinks and got to dancing - god, how i missed pub dancing! - and it was all going great. And then code name Mary showed up. I cant believe i let her ruin my night. One minute i'm dancing a way, not a care in the world and the next there she is, shotting me the death stare.
Once i knew she was there, she was EVERYWHERE. Turns out she was one of Erins friends cousins, so after having a short toilet break, P and I returned to the dancefloor to find Mary dancing with our group. That was it - i could not be there and have her either giving me the evil eye or, alternatively, completely ignoring me and making me feel uncomfortable in my own group. Once P decided she was going to go, I couldnt stay on my own, even though my sister was there living it up. I gave her amy apologies and told her if Mary was going to be hanging around, i couldnt.My sister, in her 18 year old wisdom, loudly announced she'd throw a drink in Mary's face, her tell her to piss off, because its not fair that i should be made to feel that way. Knowing that if she did try any of that, the situation would only be worse, I made my exit.
I'm really cut at myself for letting her ruin my night. I'd been excited about celebrating with my sister for weeks and, on the actual night, i skulked home before midnight. All because some girl with apparent issues has some cold of emotional hold over me. My sister showed me all her photos in the morning, and excitedly told me about how the rest of the night went, and she had such a great time. It only made me feel worse for having missed out. So apparently i'm going to have to suck it up, and learn to ignore Mary - its just hard because i'm very non-confrontational, and i always feel that if i'm in " her " way too long, she's going to go off her nut again. My only other option is to pack up and move to some place she doesnt live. Poo to that, and poo to her!
And so endeth the burfday weekend adventures. Overall, i know my sister had a great weekend and thats all matters. Plus, my hair looked h-o-t on Friday and i had sexy shoes last night - beat that Mary!