So you may have noticed that i've been missing in action from the blogosphere for few days. ( You didnt notice? Oh...ok. ) No, i havent had any mishaps like last weeks sprained ankle, nor have i given birth to anymore children ( which is what happened last time i had a prolonged absence from my blog ). No, no...nothing like that. So where have i been? I've just been on a long weekend with my beautiful boys....and having fun!


We packed our car up with what seemed like the entire contents of Flynns room ( clothes, nappies, toys, books... ) and one bag of our stuff and headed down to Sydney last Thursday lunchtime. Its at least 4 and half hours of driving, plus a half hour stop for a food/toilet break - which potentially meant a looooooooooooong trip with a toddler in the car. Lucky for us Flynn proved to be a good traveller, and only got really bored and whingey right towards the end of the trip ( although the kilometres and kilometres of roadworks across the Blue Mountains proved to be a good distraction, with all the excavators and bulldozers and trucks to draw his attention ). 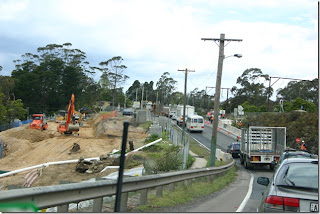 Roadworks over the mountains ( pic from here )
As you do when you have a young family and not a lot of funds, you stay with family - we were very graciously hosted Mick's Aunty Kerry and his Uncle Mick ( and yes, quite often their was a bit of confusion about which " Mick " was being spoken to ). Aunty Kerry is the kind of host who cooks enough food to feed a hundred people, so i'm pretty sure i've stacked on at least 2 or 3 kilos in the last 5 days. She is also the kind of host who refuses to let you help with anything, so we end up being completely catered to for a few days, which was really nice.

What was also nice was being able to get out as a couple - Mick and I left Flynn with his great-aunt and great-uncle while we went to see Cirque Du Soleil's " Saltimbanco ".... which was awesome! We caught the train into Homebush and got to pretend we were teenage lovebirds - we held hands, and cuddled together on the train, and stopped for a coffee date before the performance. It was nice to be able to act like a couple, without having an (adorable) little person in tow. It was exactly the romantice date night i was hoping for (but didnt get ) a few weeks ago. Ah - the magic of the circus... 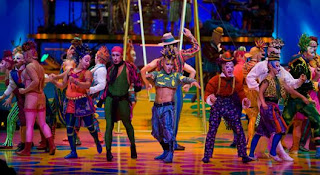 But its not like Mr Flynn got left out altogether. We managed to squeeze in some tenpin bowling - where Flynn got to have a turn, and where i kicked Micks arse twice; a spot of shopping at Penrith Westfield - where i scored 3 cute dresses at a great price, Mick got some much needed new hoodies, and Flynn got spoiled with books and plush " Hoot " toy; lots of running and jumping and digging and tricycle riding and playing with Mia the giant fluffy dog in Aunty Kerry's backyard; and even a shared ice cream or two. Plenty of fun stuff to keep an energetic 19 mth old amused!

And - aside from the Cirque Du Soleil - even though shopping and ten pin bowling and playing in the backyward is all stuff we can do at home... it WAS fun. It was nice to get out of town, to get away from the routine of our everyday lives and just be somewhere different for a few days. It was nice to eat bacon and eggs for breakfast instead of cereal; it was fun introducing Flynn to new experiences; it was good to catch up with family over a few drinks, and around a suprisingly warm outdoor heater. It just " was " and i enjoyed it. 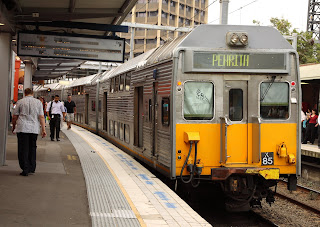 Yay for Cityrail! ( Pic from here )
What about you? What did you get up to over the weekend? ( If you went to Blogopolis i'm sure you've already blogged it tho... )

P.S Please excuse the lack of original photos with this post. I did take my camera but kind of forgot to get it out most times....
Posted by Amy xxoo at 2:20 AM