So as you may be aware, October is Mental Health Awareness Month here in Australia. There has been alot of talk about it here on the blogosphere, lots of bloggers taking up the challenge and getting posts out there in regards to mental illness, health services and programmes or just telling there own stories.


And it seems like a lot of people out there have stories to tell. I happen to be one of them.

If you're only fairly new to these parts you wouldnt know it - what with my general sunshiney-ness and lack of doom and gloom - but not so long ago i was in the grip of depression and social anxiety disorder. I like to call myself a " former depressive " but, as some of you know all too well, there is no such thing as a 100% , fool proof, "cure " for depression. The threat of another depressive episode is always there, lingering, that bastard black dog always hanging around, waiting to strike. 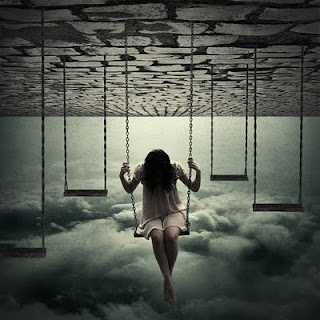 It started when i was around 14, that age where you've outgrown your childhood but your not quite sure where you fit as a teenager. Most kids have a period there where they sulk and moan and hate everything. For me, that fog didnt lift. And it wasnt that i hated everything or everyone - what i hated was me. I didnt like anything about me, and constantly worried that no-one else did either. I had a fear of being around new people my age - i was fine in the classroom with the peers that i knew, and the anxiety didnt extend so much to adults. It was just this constant nagging worry of other teens thinking i wasnt cool enough, smart enough, pretty enough, whatever. Take your pick. Whatever it was, it prevented me from being so much as able to open my mouth at parties around kids i didnt know and so, eventually, i just stopped going.

I just stayed home with my family, or sat alone in my room, thinking, pondering, worrying, crying, hating. I listened to lots of music, and wrote heaps of emo poetry. Stuff like this:

I wasnt officially diagnosed until i was 18, when i'd finished high school and most of my friends had gone off to uni ( which i didnt do. Depression stole all the motivation i had once had to do " something " with my life ). By that time the panic attacks had set in, that horrible creep of anxiety and fear that culminates in heart pounding, sweating, shaking breathlessness that convinces you that you're about to die. It was at this point that i was able to admit something wasnt right, that these physical manifestations of everything that lie beneath the surface well... they just werent normal. Up until then i just had everyone convinced i was the typical sulky teenager - but not even the most emo of the Emo sulky teenagers had panic attacks. ( Not that i knew what they were called at the time ).

So what did i do? Where did i turn?