This is part 2 of my journey through mental illness. If you missed part 1, please go here and then come back!
I went to my dad first. I was terrified that he would think i was being melodramatic or that i was a complete nutcase but he sat, and he listened, and he said maybe i should go and ask a GP. I made an appointment and i did the little checklist survey that the GP's make you do and then i was referred to a free counselling service within the medical centre.


As i was working on the one day that the free counselling service ran i decided to chuck a sickie the day of my first counselling session. At this stage, even though the GP said it was most probably depression, i still didnt really know what was going on, so i was cacking my pants at the thought of telling my employer ( or anyone for that matter ) that i was mentally ill. So i fudged the day off work and went off to see the counsellor. Even though i was nervous i felt immediately comfortable with her - she had this crazy, kicky, curly hair and she asked me questions without making me feel like i was going mad. Basic stuff like why i had been referred on, and how had i been feeling, and what happened when i felt that way. She set me some homework ( cognitive behaviour therapy she called it ) and our appointments became a weekly thing. I still majorly struggled but being able to offload in a secure environment once a week helped.

I was referred to see a visiting pyschiatrist when he came from Sydney every 2 or 3 months. He was a little intimidating and i think i clammed up a little more with him than i did with my counsellor. Regardless, he prescribed anti-depressants ( Levlen, from memory, an SSRI ) to be taken once daily, and continued weekly counselling sessions.

Little by little things became less heavy - my way of thinking started to change, and the fog started to lift. After about a year i discontinued the counselling sessions and started tapering off the meds. I started going out a little more when my friends were home from uni... and found that i actually enjoyed it. My motivation for actually " doing " something with my life started to return and, eventually, i had enough confidence to apply to be an au pair. 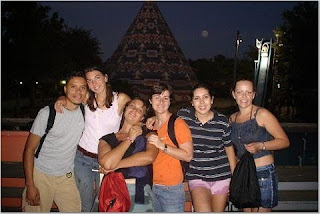 Me, in the orange, and some au pair friends at Six Flags theme park in Jackson NJ
I was accepted by a wonderful family in the USA. I spent a year living with them in New Jersey, making friends amongst the other international au pairs, hanging out in New York City on the weekends. I did a weekend trip to Florida to Disneyworld by myself. I took my two week paid holiday in Peru and did something i'd always dreamed of ( trekked four days through the Andes to Machu Picchu ). I even became the " go to girl " for new au pairs, the one the co-ordinator called to take new girls out for coffee, introduce her to the area and the other au pairs. Me, the previously socially anxious outcast!

I returned home in November 2005. For a while i was on a super high - i was back with my friends and family, i found a job and bought my own car. I took road trips to visit my (ex)best friend and went out every weekend with one of my other friends when she moved back to town. I joined the gym and went 5 days a week, relishing the natural high - and natural anti-depressive measure - that it gave me. I looked into becoming a yoga instructor ( but couldnt afford the training at the time ). I became a fan of a few of the early social networking sites like Bolt and Bebo ( ha! ). I made a few online friends, one of whom encouraged me to start blogging. I found it a great way to get my thoughts and feelings - good and bad - out of my system, making sure nothing got bottled up and stuck on the inside. My confidence was at an all time high.

And then - emotions that i'd never previously let myself feel betrayed me....
*Part 3 to be posted tomorrow...
Posted by Amy xxoo at 1:42 AM