One thing i have been pondering over with this pregnancy so far ( aside from names, birth options, scans etc ) is how Flynn is going to go as a big brother. There is no doubt in my mind that we will have an initial period where he turns completely feral and refuses to co-operate. Hell, if he' anything like i was as an eldest child he'll probably have at least one attempt at killing his new sibling ( I'm joking - pushing your new brother off his change table isnt enough to kill them. Believe me, i tried! ). I'm hoping though that the transition from " only child " to " big brother " is relatively smooth. 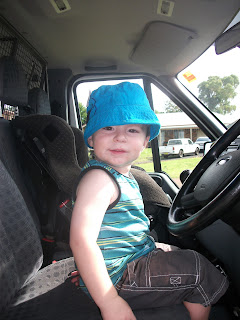 Can you imagine this truck driving little grub as a big brother?
Flynn is so gorgeous with other people babies. Even though he's still a little shorty, he bends down to talk to babies and talks in this cute little baby voice. He asks if he can give them a cuddle or " pat " them, and when he does he strokes their little heads so gently it makes me smile. For such a rough monkey of a boy, he's incredibly sweet and gentle with people smaller than himself. ( This gentleness, however, does not yet extend to pregnant mothers. He's still happy to climb all over me ). It almost makes me proud that he's so aware of how to behave around babies, and especially proud of how protective he is towards them. Of course i know that it will be a bit different when the baby is living in his house, stealing away his mums attention, but i still have this inkling that the inherent gentleness and protectiveness will be there.
We've already explained to him what it means to be the big brother. It means he has to help us look after the baby, to give it lots of cuddles and kisses to keep it safe; it means he gets to move on to more " big boy " things and he can pass his baby stuff on to his new brother/sister; and it means he has to show the baby how to be a good boy or girl. Though i'm not expecting smooth sailing right from the outset, i have no doubt Flynn will be able to do all that. He may be a total dude, but he's a pretty caring little fellow when it comes down to it.
So at this point, with 15-ish weeks down and 24-ish weeks to go, i'm just going to keep on talking about babies and families and changes with Flynn, and hope that when push comes to shove its actually more of a cuddle than anything else.

What about you - for those who have more than one child, how did your eldest cope with becoming a sibling?
Posted by Amy xxoo at 12:38 AM