Another Win For New Zealand

I just wanted to say a quick congratulations to New Zealand, for getting in ahead of us again. First, they gave women the vote before us, and now they've legalised gay marriage. 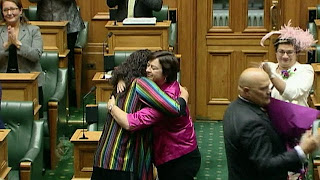 Jubilant scenes in the NZ parliament, courtesy of the BBC

The last time I wrote about gay marriage - so controversial! - I got a few rebukes from readers. This time, whether your opinion differs from mine or not, you may say what you like, but I'll say this: Good on you New Zealand. Good on you for having the ability to see that the definition of 'marriage' is just a bunch of words, and that those words can be changed. Good on you for having a national heart that is accepting of that change, and compassionate enough to make it. And good on you New Zealand for making it possible for everyone, no matter what their sexual orientation, to commit to a lifetime of marriage with the one they love.

Australia, time for you to step up to the plate....