Welcome to this weeks Blog This! challenge. On todays menu:
Tell us about a proud moment in life - of you, of someone else, when you made someone proud. Maybe you want to focus on an aspect of your life or someone you know that exudes pride?

Ok, yes, first of all - i totally stole the name of a U2 song for my post title. Second of all, the first person tha comes to mind when i think of the word " pride ", of who I am proud of, of who is proud of me....is my Dad. 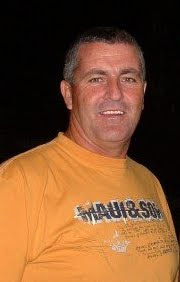 Thats him - my dad. We've always been close, my dad and i, the kind of relationship where we can finish each others sentences, have inside jokes and generally just " get " each other. But in the past 8-ish years, since finishing high school and growing and maturing into adulthood, i've realised not only how much i love him but how proud i am of him as a person.
He's always done whats best for our family, regardless of whether or not it was good for him; he worked two jobs for years, existing on only a few hours sleep a night, to provide for us; when he could afford to cut back to only one job, the job he took on was physical labour. He was told by his doctor that this work would aggravate his back condition, to the point of paralysis if he let it get too far - but he continued to work regardless. For 10 years in fact, until he was told it was either a spinal fusion and rehab and cutting back on duties - or it was a wheelchair. He chose to take the surgery option and once he was back on his feet, he was back to work, doing the same job as before, because thats what he needed to do for his family. This persistance has paid off for him in the last two years - he was given a promotion which meant a better paid job with less manual work.
His dedication to us knows no bounds. He came to most of our sporting games ( even though he admits to never liking netball ); he would let you practise your speech with him as your audience, so you werent so nervous when you had to give it in class; he listens, even now, to everybody's issues and doesnt expect anything in return but that you consider his advice; I'd never in my life seen him pick up a pen and paper to write a letter, but he did just that, and wrote me when i was living overseas; he's an amazing Poppy to his three grandkids, even though he tells them " stories " about how he used to be a doctor/cowboy/hatmaker ( and we kids know none of it is true ).
Basically, I'm proud of him because of the kind of man he is. He loves with his whole heart, which means he doesnt forgive easily when he's hurt. If you hurt him too much ( though he wont admit that " hurt " is the right word ) he'll cross you off his Christmas card list forever. Yes that may be stubborn - but it also means he doesnt suffer fools easily, and that he knows the key to life is to be happy. If someone doesnt make you happy, you dont bother with them anymore, and you take that love you had and focus it on the people who mean most to you. He does everything that he does for his family, and we love him for it. Though i know he's taught me many a life lesson and showed me, through example, how to be a good parent, he claims it was us, his children, that taught him to be a good father.
Which ever way it happened, no matter where he picked up his skills, he is a good father and a good man. And thats enough for me.
Posted by Amy xxoo at 8:55 PM