When Does Existence Count?

Thats the question that I, and many others in Australia, am pondering today? It comes on the back of the case of a couple who, after having been hit by a drug driver on Christmas Day, lost their unborn child at 32 weeks ( " NSW to review unborn child laws " ). This poor woman, who was hit whilst out taking a walk, had to endure the pain and suffering of having to birth her child even though they knew the baby, already named Zoe, would be stillborn - and now, because of laws regarding what constitutes " human ", she cannot even get justice for that loss. See, here in New South Wales, a baby is not considered human until it has taken a breath and, thusly, this drug driver cannot be tried for either murder or manslaughter. 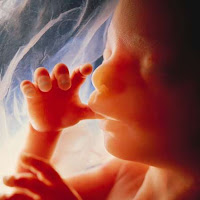 This, frankly, is ridiculous. Is the law saying a baby does not exist until it breaths? So you can have a baby growing inside you, evidence of their existence available on any ultrasound screen, available to any passer-by in the street - yet, in the eyes of the law, that baby doesnt exist until it takes its first breath of air. What a load of rubbish! I know this poses all kinds of moral and ethical questions, but surely a baby at 32 weeks, that could be born that early and survive, which kicks its mother, and gets the hiccups, and can suck its thumb - surely that MUST count as human?

The problem, as its been described to me, is that it raises the question of when would abortion become murder? I dont know at what stage abortion becomes murder - and therefore illegal - in this state, but i'm damn sure its well before 32 weeks. Not that i want this to become a debate on abortion but, for the record, i consider myself pro-choice - although i dont believe that abortion is the right choice ( for me, or anyone else ), i do believe that each individual woman should be able to choose for herself. But abortion is illegal in this country beyond a certain stage because the law regarding abortion must recognise late stage abortion of a fetus as murder. Mustn't it? Otherwise abortion would be legal at any stage. So why is it different for the loss of a child through other criminal means?

I just dont get it. And i'm sure this poor couple mustnt either. My heart goes out to them, their living daughter, and their angel baby. I just hope this legal loophole can be rectified soon so that other families need not suffer the same....
Posted by Amy xxoo at 6:05 PM