Seriously, i'm over the cold weather already. Winter doesnt even officially start until tomorrow( ( and its not even " cold" cold yet )  but already im not enjoying having to climb into a cold bed at night and shiver around to warm up; rugging up before leaving the house in the morning; having to turn the heater on by lunch time so i dont get nippy; and definately not enjoying the sore throat that is lingering from last weeks common cold. ( the only thing i am enjoying is the hot chai latte before bed of an evening...mmmm .) 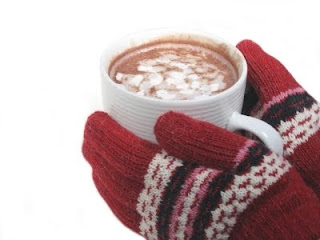 Poor little Flynn still has a runny nose and a sore throat aswell, and its a battle to keep him warm during the night because the little dude likes to wriggle and kick around - which means the sheets and blankets either go flying or, at the very least, end up around his ankles. Luckily he has a few pairs of soft, snuggly pyjamas so i can layer a singlet, a onesie and the pj's to keep him toasty.

We've had a spare mattress set up in a loungeroom for the past week because people have been sick ( ie me and Flynn ) and other people ( ie Mick ) have very kindly given us our space and thus saved their own sleep. However, i am contemplating leaving it out for the entirety of winter so Flynn and i can be warm and snuggly all day long, snuggled in under the quilt. It would probably look like we had squatters moving in, but other than that it would be awesome.

What would also be awesome? Spring. Only 3 months of crappy winter to get through!
Posted by Amy xxoo at 8:11 PM