A Fathers Day Recap - Sort Of

Yes, i thought i ought to a recap of Micks first Fathers Day. And I am. That being said, there is not too much exciting to tell you. 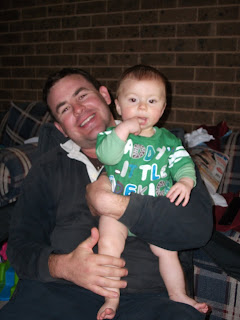 There they are - my fellas
We had a lovely family breakfast at my brothers house - bacon, sausages and special cheesy ommeletes that my 4 year old neice claimed that she made ( without help. I think not, little H ). All the daddies present ( Mick, my bro and my dad ) all got special hugs and Mick got a little smile out of the fact that my one year old neice can now say his name ( she previously called him Tick ). After breakfast we headed to our local mall to get some stuff for lunch and Mick decided he wanted to buy himself a Nintendo Wii game....which he played for most of the rest of the day. Boring. Fear not though - he did manage to play with and cuddle his son at a few points, and Flynn did find watching Daddy play Wii a little amusing. What was i doing? Housework, and in the evening making Mick a nice Fathers Day dinner - Creamy chicken bosciaola followed by a chocolate mousse for dessert. Seeing as i'm such a noted chef with an awesome foodie blog ( umm, no Amy, you're not... ) i thought i would make you all salivate with a picture of said mousse: 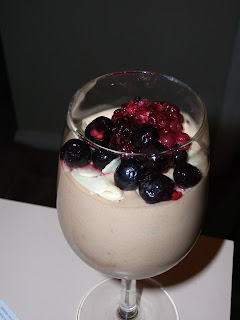 Luckily, the recipe was to serve 6 and there are only two of us, so we had leftovers for tonights dinner ( oh, and i may have had some for afternoon tea ). How did everyone else enjoy Fathers Day?
Posted by Amy xxoo at 3:52 AM