No, this is not a post in regards to Julia Gillards favourite campaign slogan.*
Rather this is me venting frusturation on behalf of little Flynn and myself. See, my little man has never really enjoyed tummy-time - he downright hated it for a while there - but for the last two or three weeks he has regularly been launching himself onto his belly from a seated position. There he'll lie, on his stomach, legs and arms a-flailing, getting frusturated by the second because, as of yet, he can;t do much else. He can straighten his arms and push up, and he can get his bum up in the air and onto his knees....just not at the same time. I suppose its annoying for him that he can get some little stuff happening but he cant move anywhere. And that is becoming frusturating for me. Why? Because this is the face i'm seeing all throughout the day: 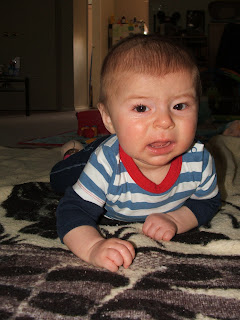 This face and a sad, angry, little moan ( or cry ) which i take to mean " I hate this Mum! I can't go anywhere! Can't you just come pick me up and cuddle me ? " You know, which i'm trying not to do: i'm trying to encourage him to crawl by leaving him there to cry a little, by lying down in front of him and holding my hands out, by putting a toy in front of him that will grab his attention. Nothings working yet. Or rather, nothing is making him go forward - in the past week Flynn's been able to do this little " worm " like thing but only appears to be moving him backwards - which frusturates him more, because he squirms back and back and back until he runs into furniture or a toy or something and gets stuck. I guess i'm wondering - is this normal at 7 and half months?
I've been doing a little research that says most babies start crawling between 6 and 10 months, so its not like Flynn's running late in the crawling department; however, it also says that they'll start crawling soon after learning to sit on their own, and Flynn had that down pat pretty early. He was sitting straight and unsupported at 5 months, so i was assuming that the next milestone would come a little early too. And to even further confuse me - apparently after crawling babies will start to pull themselves up on things. AFTER. Flynn apparently didnt get that memo - if i hold my hands out he'll grab them and pull himself up to standing ( he's been able to do this for a while ) and in the last week and a bit he's started pulling himself up on furniture. He's even started taking small steps towards me after he's pulled himself up, if i leave my hands outstretched. So whats up with that? Could that be a sign my little dude is going to skip crawling all together and just go straight to cruising along the furniture, and then taking those first, awkward, solo steps?
I don't know if i should be concerned, all i do know for sure is that this little fella of mine has me mighty confused about where he's at and where he's going too. Any tips? Anyone with experience similar to this? And is there anyone willing to tell me i'm fussing over nothing and i should just enjoy his immobility before he gets his little self a-moving and starts raiding my kitchen cupboards?
AND JUST A QUICK NOTE: Thanks to Lori at Random Ramblings of a SAHM for helping me with the code for my button. I suck at techy stuff and she was willing to take time out of her busy, 2-children-to-raise, schedule and help me out. Thanks muchly!
* Second note - to all those non-Aussies reading my blog, we're electing a new Prime Minister next weekend. Julia Gillard is one of the candidates ( a red-headed, female candidate - oh my! ) and " Moving Forward " has been her ( rather lame ) campaign slogan...
Posted by Amy xxoo at 10:55 PM