Thank Gawd its Friday - and thank Gigi over at KludgyMom for Friday Flip Offs, that wonderful end to the week where we get to rid ourselves of all our frusturations and annoyances, just in time to enjoy the weekend! 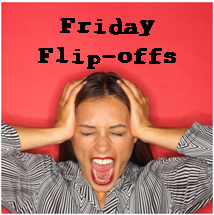 To the cold that developed from last weeks sore throat - screw you man. I told you last week that i knew you were coming and i wasnt too impressed about it, yet you showed up anyway. Because of you i've been snuffling and sneezing and coughing all week and now Flynn is a little snotty-booger too. Oh, and we also had to miss swimming on Monday for the second week in a row. So not happy Cold. So not happy. Why don't you take your disgusting germy self and just FLIP OFF!

To the friend who sent me a text at 10:38pm last night - thanks for waking me up. Apparently you did not remember that i am the mother of a 7 and half month old that has decided it is now time to change sleep patterns and is now waking up 4 times a night - AGAIN - and that, thusly, i need to go to bed early. Also, you apparently thought i would want to see another photo of your arse. Umm, no. So not only did you manage to wake both me and Mick up but it wasnt even for anything important. And the worst part was i'd gone to bed at 9:30pm and had only just managed to get to sleep when you texted me - and then it took me another good 45 minutes to get back to sleep. So i didnt actually get to sleep til around midnight, Flynn woke briefly at 1:15am and then wanted a feed at 3:30am, and wanted to get up for the day at 5:30am. So whats that? About 5 hrs sleep? Which is more than some mums get but if it hadnt been for you, dear friend, and your fishnet clad arse ( thanks for the image by the way ... drinking before you went out, huh ? ) i could have had 6 hrs sleep. Take your stupid photo and your stupid late night text and FLIP OFF!

To the book i borrowed from the library on Wednesday - i managed to read your first 8 pages and then.....i decided you suck. Normally i'm willing to read at least the first chapter but not with you. See your cover appealed to me, and your blurb made you sound interesting, but in those first 8 pages you made so many references to various characters and concepts in your imagined mythology that i was put off by it. You get what i mean? If your going to be a fantasy story - you know, in the vein of, say , " Stardust " or " Harry Potter " you need to either ease your reader into the intricacies of your fantasy world, or write yourself a prologue that explains at least the basics. Just launching into King This, Prince That, this shadowy political entity, that ancient circle of magic blah blah blah.... its just off putting. So, i've put you down after 8 pages and its back to the library with you where you can FLIP OFF!