And yes, this time i mean Zumba, the dance fitness craze, not Adriano Zumbo. 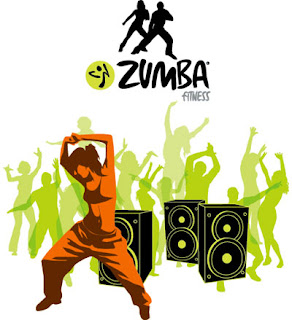 I know you all know what i'm talking about but just in case you dont want to admit to having watched the infomercial a hundred million times here's the rub: Zumba is a Latin-inspired dance/aerobic fitness method, created by a Colombian trainer/coreographer back in the 90's. There is an infomercial for the home DVD packages on tv somewhere in the world approximately every 15 seconds ( at least, thats what it feels like ) and trainer-lead Zumba classes are popping up at gyms and town halls all over the country. Like i said, its hard to escape the Zumba infomercials and when my mother saw an ad in our local paper for a class being run at a primary school hall she thought she'd like to give it a go. Only she didnt want to go it alone - she said she would be too embarrassed to go by herself and didnt want people to laugh at her lack of co-ordination - so i said " hell, why not ? ", i'd give it a go too.

And i'm glad i did - it was fun! Sure, i wasnt exactly awesome at it ( i mean for some routines i had me some awesome rhythm, some i looked like a grasshopper on a barbecue.... ) but it didnt matter because no-one else was nailing it either. There were girls there who looked about 8 years old right up to ladies who were possibly in their 60's, and not a single person had it downpat - but neither was there a single person not laughing. Zumba does what it said it would do - it gets you moving, it gives you a workout ( as evidenced by my lack of breath and red face by the end ) and it's fun. And, happily, i havent woken up too sore this morning, so thats always a bonus. My mum said she enjoyed it too, so we're heading back next Wednesday night. I reckon if you've been curious about Zumba and tossing up whether to try it out i say go for it - worse scenario is the you run into the person next to you, fall over and sprain your ankle, and can't go to work for a few days. But hey - at least you did it with a smile on your face ( and you get a few days off work )!