So, i was going through my archive, torturing myself by reading every post i've ever made with reference to my now ex-friend ( i'm a sucker for punishment, but more on that at a later date ) when i came across a post i had real fun doing. Seeing as it was from way back in 2008 and i figure it was ripe for the re-doing. I think it was once a meme that i wasnt tagged for but stole anyway*. The idea was to head over to http://www.someecards.com/ and choose five cards that were representative of you and your life right now. Kind of like pretty, funny, little puzzle pieces. So i did just that - the five i have chosen are different to the ones i picked back in 2008 so here they be: 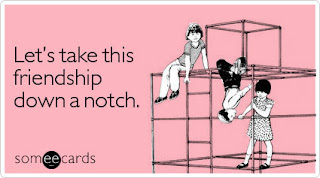 Ah, so this would should be self-explanatory ( and if it isnt, where have you been the last few days? Not on my blog apparently... ). Thats me in the cute dress, at the bottom. I may feel like i'm at the bottom of the whole friendship jungle gym there, but at least that means i can only go up ( and i'm wearing a cute dress. Always a bonus ). 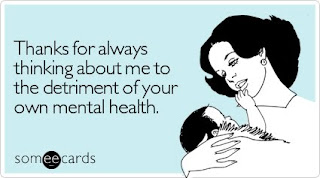 Yea, thanks Mum and Dad. Oh, and thanks to me from Flynn. Over the years i've been a bit of a worry for my parents, not because i was the ultimate teen rebel but because i was the ultimate teen emo. I'm sure its taken its toll on their mental health ( although i think my dad's always been fairly wack ). And its fair to say the trials of Flynns first 8 months have done my head in some what - not that i was entirely stable to begin with. So thanks to my parents for keeping me as close to sane as possible! 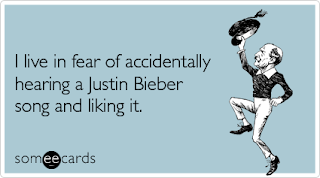 I do. The thought of it scares me. It hasnt happened yet but there is a first time for everything. But the day i start singing along to Justin Bieber - not because a song has been on constant rotation and i cant get the bloody thing out of my head - but because i actually LIKE it, is the day you people need to promise to hunt me down and shoot me. Please?!? 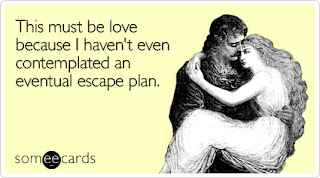 Oh yea - I love you Mick! In fact, i love him so much, i havent even entertained thoughts of ever wanting to, or needing to, leave him. Thats love right? Hell, i didnt even have an escape plan for our first date ( you know, the one where you get your friend to call with some kind of emergency ? ), thats how much i liked him initially. Methinks i've got me a keeper... 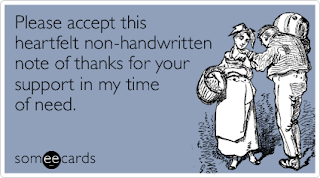 And this, my lovelies, is for you all. Your kind comments have been a great, big, fat help the last few days. Its funny how people who have never met me in real life ( which is all but one of you ... ) can have a better read on my personality than someone i thought i was close to. Sure, there are two sides to every story and i'm sure ex-friends version of events is somewhat different to mine, but its nice to know that i have some support based not only on recent events but on what you guys have read over the past few years. I know that my blog is a true reflection of who I am, and to know that you guys support me based on what you've read - on what is ME , as it were - means a lot. So mucho gracias, dudes, mucho!
*Also, feel free to steal this idea if you want. Its not a meme so i aint tagging anyone but if you have bloggers block and are in need of a kick along, take this...
Posted by Amy xxoo at 4:15 PM