I've officially come to the end of my tether people. I mentioned in Mondays post that Flynns behaviour has been steadily driving me nuts lately and I was dreading spending a full week at home with him. We actually didn't start out too badly but after an afternoon of screaming from Tully ( damn you teething during a heatwave! ) I kind of lost my shit at him when he lost his shit at me. Over having his hair washed, mind you, of all bloody things. Yes, ladies and gentleman, I have well and truly hit the wall.

In fact, I am so bamboozled that I have sat down and read my first ever 'parenting book'. Sat for the last 45 minutes and tore through it, cover to cover. 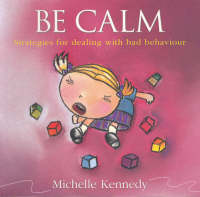 Its called ' Be Calm ' by Michelle Kennedy, and I picked it up from my aunty when she let my sister and I take the pick of her stuff before she moved to Townsville ( a pre-garage sale rummage, if you will. I got a heap of great books for the kids too ). Its not a weighty tome, but rather an easy to read ' how bout you try this? ' type of instructional. It actually reads a bit like a conversation with a friend, or a mothers group, which I liked about it. It made me feel better to see that I actually already practice a lot of the strategies in the book, and I'm kind of looking forward to tomorrow to see if the opportunity arises to try some more.

A mother, looking forward to a tantrum? Sounds mental doesn't it? But even if its just for tomorrow, I'm going to look at Flynns epic nana-chucking as a chance to practice being a better Mum.
That's after my 'me-time' first thing in the morning though. Even if that 'me-time' only involves doing the grocery shopping without any children. It may not be everybodys idea of ' me-time' but when you're a busy mum, you'll take what you can get!